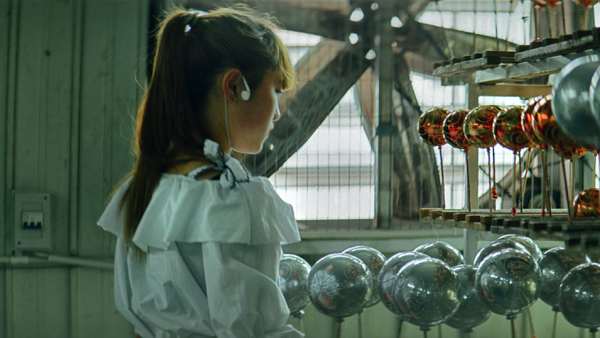 China has cashed in on Christmas. In this socialist pre-dominantly non-Christian superpower  capitalism reigns in a city just south of Shanghai. Yiwu is best known for its Christmas-related merchandise. And that’s a tall figure –  accounting for 90% of the domestic output of festive fare, and around 70% of the world’s total. As early as May the industrial heartlands pound with preparations for the Christmas season amid strong demand from all over the globe.

Mladen Kovacevic focuses on the smaller more intimate story: that of the workers caught up in the still relatively new Chinese Dream. In his first full length documentary feature the Serbian filmmaker has no trouble in making this a cinematic experience – the bright colours and sparkly decorations providing a striking visual foreground to the subdued underlying narrative. Behind the tinsel and pizazz there are more serious issues at play. The workers producing these goods are under pressure to perform. Despite rising wages offering them the ability to have the latest smart phones they are still forced to work long hours in airless conditions returning to their meagre lodgings at night where they miss friends and family left behind in their rural hometowns. The dream of wealth in the prosperous new China is a distant one. the truth is a different story.

Keeping dialogue to a minimum the film shares the stark reality of the human story at its core: and we feel increasingly sympathetic of these stressed individuals who try to smile and think positively despite the gruelling workload as they choke back traces of glitter and dehydrate beneath the harsh overhead lighting. Work has become the family, their colleagues are their new sisters and brothers and they joke and share their lives far away from home and ask each other: “what is celebrated on Christmas”.

Kovacevic then explores the other side of the coin. The bosses who have built a fortune from this risky business venture with a view to exploring new markets through cross-border e-shopping platforms, adapting the decorations to suit the cultural sensibilities of the overseas clients in Russia, South America, and Europe. They too have made sacrifices, rarely seeing their families living miles away. They are conscious of the gruelling work load placed on staff but are keenly aware they must not push them too hard. There are 470,000 market dealers in Yiwu. Merry Christmas, Yiwu presents the reality of modern China: a thriving capitalist nation enveloped within the iron claws of modern day communism. MT