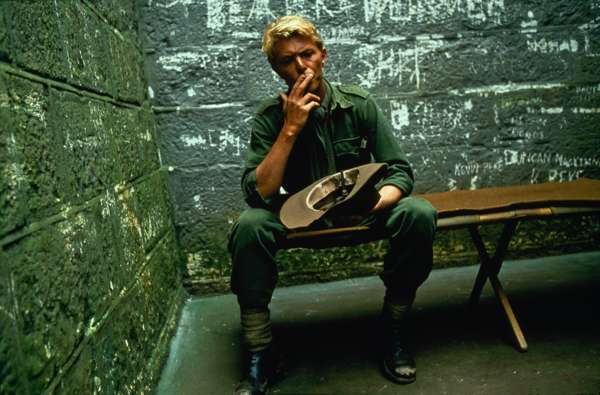 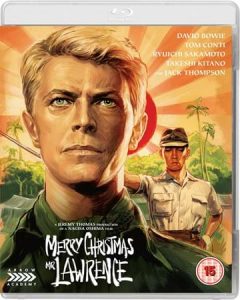 David Bowie is the star of this emotional rollercoaster from Japanese New Wave director  Nagisa Ôshima (1932-2013) Empire of Passion).

Mr. Lawrence has aged very well and has lost nothing of its impact as an analysis of male short-comings. Adapted from Laurens van Der Post’s The Seed and the  Sower, the film takes place in a Japanese POW camp during the Second World War and is centred on four men: British POWs Major Jack ‘Strafer’ Celliers (Bowie) and Lt. Col. John Lawrence (Conti), and two Japanese soldiers, camp commander Capt. Yonoi (Sakamoto, who also composed the score) and sergeant Gengo Hara, a brute with a softer side.

Group Captain Hicksley (Thompson), the camp’s highest ranking officer and the spokesmen for the prisoners plays a minor, but catalysing role. Celliers’ stubbornness sees him locked in a battle of wills with the camp’s new commandant, a man obsessed with discipline and the glory of Imperial Japan. Lieutenant Colonel Lawrence (Tom Conti) is the only inmate with a degree of sympathy for Japanese culture and an understanding of the language, and attempts to bridge the divide through his friendship with Yonoi’s second-in-command, Sergeant Hara (Takeshi Kitano), a man possessing a surprising degree of compassion beneath his cruel façade. Celliers is also living with a guilty secret: he has betrayed his younger brother at boarding school. Captain Yonoi is also secretly ashamed of himself for being part of a military uprising in 1936, but unlike his comrades-in-arms, he escaped execution. Yonei develops a homo-erotic crush on Celliers, provoking him into a duel with the salve: “if you kill me, you will be free”. Celliers declines.

When a secret radio is discovered at the base , Yonoi makes Celliers and Lawrence take responsibility, sentencing them to death. But on Christmas Day, Hara frees the two prisoners, wishing Lawrence a titular “Merry Christmas”. Hara gets a light ticking off for showing mercy. But when Group Captain Hicksley learns about Yonoi’s plan to replace him, a fracas develops, with the Japanese camp commander ordering Hicksley to have all men stand up on the parade ground, including the sick. When Hicksley refuses, Yonoi wants to kill him, but Celliers kisses him on the cheek. With his honour in tatters, Yonoi retreats and is replaced as camp commandant who doesn’t give Celliers such a wide birth, “unlike my predecessor, I am not a romantic” and buries Celliers up to his neck in sand as a punishment. At an epilogue set in 1946, Lawrence makes a trip to visit Hara, who has been sentenced to death. Yonoi has already been executed, and Hara tells Lawrence that Yonoi gave him the lock from Celliers hair to place in a shrine in Yonoi’s home village.

David Bowie commented later that during the shooting he had been surprised Ôshima only showed the perimeters of the prison camp – yet when he saw the film afterwards he was able to appreciate how much more terrifying the threat of the compound was in contrast to the detail of the camp itself. DoP Toichiro Naushima (Double Suicide) shows how the mens’ emotions reflect the harshness of their surroundings (filming took place on the Polynesian island of Rarotonga) by continuously changing the angles of close-ups and the long tracking shots. Merry Christmas avoids the moral judgements made by David Lean on Bridge on the River Kwai.  In his valedictory chat to Hara, Lawrence makes a shrewd observation: “there are times when victory is very hard to take“. Ôshima always keeps the balance, avoiding sentimentality, without shrinking from this very emotional conflict. AS