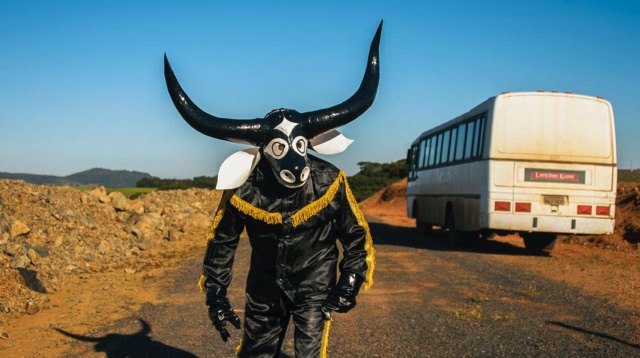 Miranda Maria’s debut feature is not a welcome calling card with its protracted sequences of gratuitous violence against animals. A more muted version would have certainly benefited the overall evaluation of a film which never quite reaches its potential in exploring the key issues the Brazilian newcomer seeks to address in his first feature, namely social injustice in Brazil.

Essentially a reflexion on modern colonialism Memory House opens with an absurdist scene that takes place in a European style 1950s office, involving the central character, a black indigenous worker Cristovam (Antonio Pitanga, once the star of the ‘Cinema Nuevo’ in the 1960s). He is listening to a tirade from his boss Kainz, speaking in German, his female assistant translating. The message is clear: Cristovam has to take a pay-cut to save his pension plan.

Things get even more bizarre when his fellow workers are forced to wear T-shirts bearing a separatist message and to sign a petition demanding independence for the South. A speaker spews out a message: “we came from Europe to bring innovation, a new perspective to the new country, but we can no longer continue to be the region which pays the most tax and receives the least in return, taking orders from the lazy folks in the North”. Cristovam, having been a “member of the Kainz family for over twenty years”, is one of many workers who re-located with the company from up North.

Cristovam’s reaction to this bad news is passive resistance: he steals a pair of security gloves which he later throws away on his way home from the factory in a village dominated by white, German speakers. The kids taunt him, not surprisingly, given his habit for carrying a bull-horn which he blows everywhere, even in the pub. There he has a desultory relationship with a much younger woman (Cavalcanti), highlighting his loneliness. But everything changes when he stumbles over an abandoned house which allows him to escape the alienation of the village. Here he makes into a new home for himself, gradually adding new things and developing a parallel, hallucinatory universe together with ferocious wild cats, jaguars, bulls with blazing eyes and objects that come alive.

Christovam takes up the life of a vengeful cowboy, driving the two worlds he inhabits into violent confrontation: The old way of living in harmony with nature collides with the exploitative colonial style capitalism, which has no place for him here.

The director’s intentions are clear but his didactic and schematic approach often undercuts the aesthetics of the feature. The inevitable climax is somehow telegraphed, losing some of its impact. But the main point of critique is the unbearable violence against animals, who Miranda Maria singles out for suffering much more than Christovam, who seems more of a Christian martyr than anything else. There is much to admire with the use of mysticism, but the director has to find a different ways to express himself if his work is to be acceptable to international audiences. AS