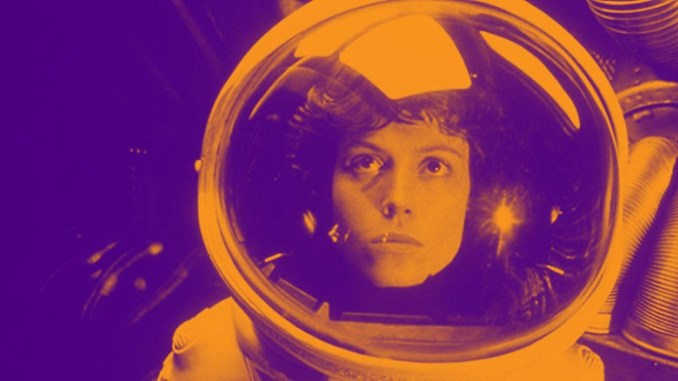 After 78/52, a dissection of Hitchcock’s famous shower scene from Psycho, writer/director Alexandre O. Philippe turns his attention to another gruesome classic, Ridley Scott’s Alien – and in particular the chest-busting scene, when John Hurt gives birth to a fleshy foetus with silver teeth. But Memory is not only the genesis of the Alien, but an interpretation which involves Greek mythology and the work of Francis Coppola.

To start with: what would have happened had Walter Hill directed Alien, as originally planned? Instead he chose Southern Comfort, Ridley Scott taking over the helm. Roger Corman originally offered to work with O’Bannon on a much smaller budget, if Fox agreed to abandon the project but they had blockbuster in mind after the success of Star Wars. Dan O’Bannon (1946-2009) then abandoned his script of 29 pages, because he could not see how Alien could get on board the spaceship Nostromo.

The name ‘Alien’ was a nod to Joseph Conrad whose Heart of Darkness had been filmed by Francis Ford Coppola as Apocalypse Now – nothing but a horror film set during the Vietnam War. O’Bannon was also responsible for bringing the Swiss artist RH Giger (1940-2014) back on board, who had been fired by Fox: his artwork was deemed as “sick” by the studio bosses. Both widows, Carmen Scheifele-Giger and Diane O’Bannon appear in Memoir; Diane claiming that her husband did not steal from anyone in particular but cherry-picked from Greek mythology, the works of Francis Bacon, Picasso’s Demoiselles d’Avignon, the films of Alejandro Jodorowsky and the writings of HP Lovecraft. The body of the Alien itself gave the team the most headaches, earlier versions were simply too cute or unimpressive. Cast member Veronica Cartwright called the final version a giant penis. O’Bannon suffered from Crohn’s disease (which killed him eventually) and used his illness for the “birth of the Alien”, a vile being that sprung from John Hurt’s stomach, after two failed attempts.

DoP Robert Muratore integrates his work with the Alien excerpts, and even his talking-head shots are sometimes created with lighting and angles which channel the horror of the Alien scheme. But where was Sigourney Weaver in this fascinating piece of detective work which will fascinate film fans and newcomers alike? Her vital input would provide the final key to this chamber of horrors. AS