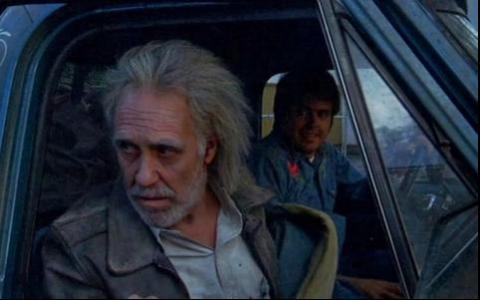 A gentle comedy about the American Dream, Jonathan Demme’s 1980 portrait of the affable Melvin Dummar and his brief encounter with tycoon Howard Hughes, his polar opposite, is a reminder of a Hollywood long gone, and more’s the pity.

On a night in 1968, gas station attendant Melvin Dummar (Le Mat) leaves his vehicle on Highway 95 to relieve himself in the Nevadan desert, where he finds an elderly injured man besides his motor cycle. Melvin wants to take the man to hospital, but he asks to be driven to Las Vegas instead. On the way they chum up, singing Bye Bye Blackbird before the enigmatic stranger admits to being Howard Hughes (1905-1976), the reclusive multi-millionaire. Hughes (Robards) vanishes into a desert inn but never forgets his meeting with the ordinary guy who goes on to drive his wife Lynda (Steenburgen) mad with his hair-brained schemes. Demme coaxes great performances from his cast in this feel good slice of nostalgic fun that has a touch of the Preston Sturges about it and is filmed with loving care by Hollywood veteran DoP Tak Fujimoto (Badlands) picturing small time America as a fairy story, which might even have been true! AS

OUT ON DVD COURTESY OF SIMPLY MEDIA FROM 4 JULY 2016