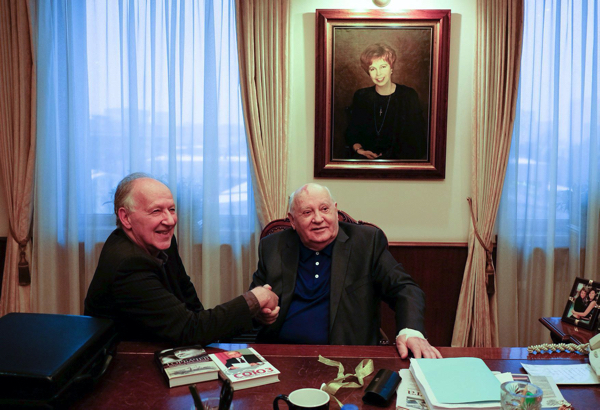 The thirtieth anniversary of the fall of the Berlin Wall also marks the UK release of a new film that gets close up and personal with the former Russian leader who helped end the Cold War.

Award-winning Russian filmmaker Vitaly Manskiy’s made for TV doc Gorbachev. After Empire (2001) put the spotlight Gorbachev during a year in Russian politics but this a more intensive, face to face affair.

Werner Herzog is a seasoned documentarian, with nearly 50 year’s experience in the form. But for some reason here he comes over all smily and deferential, unable to maintain a distance from the admittedly affable former head of the Soviet Union. The two clearly hit it off and even share the odd joke.

Meeting Gorbachev consists of a series of interviews with Gorbachev, now 88, who considers his career with considerable regret despite his numerous achievements. Born in 1931 into poverty in Privolnoye, a remote village in the ‘middle of nowhere’ according to Herzog’s narration, he was brought up largely by his grandparents, his father being away at the War. Later Gorbachev remembers his  father saying: “Fight til the fight goes out of you, that’s the way to live”. And it’s certainly a maxim that has served the leader well as he reflects over the past and his legacy as the last Communist head.

Herzog opens up the archives with a brief history of earlier Russian leaders – and the footage here is quite gruesome – featuring the state funerals of Leonid Brezhnev and Yuri Andropov who peek out from their red-dressed caskets as Chopin’s sombre classic march plays on. Eventually Gorbachev became General Secretary in 1985, one of the youngest leaders, and brought about a remarkable feat considering our own Brexit intransigence: the Cold War ended as a direct results of his reforms. This victory set the stage for a slew of Eastern Bloc countries finally to gain independence, with Germany coming together in 1990. Gorbachev also worked closely with Ronald Reagan to reduce nuclear armaments that had caused the parlous environmental disaster of Chernobyl.

Gorbachev also shares with Herzog the continuing pain of his personal life: a happy marriage to his college sweetheart Raisa that ended in her death at only 45 from leukaemia. By the same turn, colleagues talk almost fondly of the contribution Gorbachev has made during his career. George Shultz, Reagan’s secretary of state, remarks on his negotiating skills and his strength of purpose. Margaret Thatcher discusses their respect for one another, despite their polarised political positions. Horst Teltschik, national security advisor to German Chancellor Helmut Kohl, also comments on Gorbachev’s many achievements.

But a great deal of Gorbachev’s democratic measures have now been swept under the carpet by a more authoritarian leader in the shape of Vladimir Putin, who is seen briefly giving his condolences at Raisa’s funeral. It is not discussed whether the two leaders see eye to eye, and clearly Putin has a major task on his hands in trying to restore Russia’s ‘Soviet glory’.

Although the documentary is mildly hagiographic in flavour, by the end we start to feel a certain sympathy for this warm-hearted and hard-working man who clearly did his best to improve the lives of ordinary Russians with his well-thought-out reforms, which now appear to have gone by the wayside. It seems the modern world is gradually moving back to the past in many countries. Sadly progress can often be derailed. MT