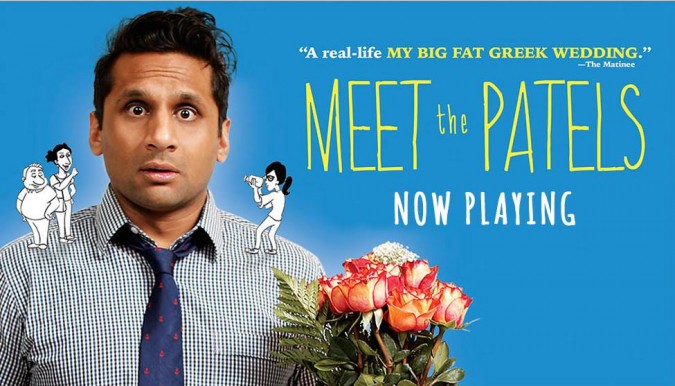 Ravi Patel is an American via Gujurati and at nearly 30 he still hasnt met ‘the (Indian) one’. So with the help of his sister Geeta’s camera skills and his matchmaking parents, MEET THE PATELS documents his search for a bride.

Combining rough comic sketches, cartoons and interviews with family and friends, MEET THE PATELS is upbeat, fly-on-the-wall and fun. The first step involves compiling a ‘biodata” – a form of biography that includes family info and a personal CV. To be a Patel is to be a part of the biggest family in the world, so Ravi is sure there should be plenty of choice. And men are still the hunters, so how difficult can it be for an intelligent well-qualified decent looking actor to find a decent bride? Far from being fraught with setbacks this stab at home-movie-making is hilarious and poignant.

Ravi’s family may be traditional and old-fashioned but they are loving and reasonable, but he hasn’t told them about his his girlfriend of two years, Audrey, a flame-haired all American girl. And although the relationship recently ended, it’s clear that Ravi is not over her. What impresses here is Ravi’s close and remarkably mature relationship with his parents which is a refreshing change from the usual dysfunctional family stories that so often feature in drama. Also impressive is Ravi’s openness to experiment but not afraid to trust his heart. The idea of an Indian bride excites him and he begins the gruelling process that includes the usual internet dating  and a traditional matchmaking incentive by his mother, Champa. Ravi sets off on the family’s reguarl family vocation with intention, this time, of finding a wife.

The style here is for the most part fresh and insightful; the handheld camera helping to keep things authentic and quirkily engaging. Ravi is an amusing guy who comes across as decent, approachable and well-intentioned – certainly any girl would be happy with him as a husband. The Patel girls are cute and comely and certainly no fools. But is Ravi really ready to move on?. An engaging and enjoyable documentary that explores themes of internet dating, matchmaking and ethnic heritage and ultimately reaches a surprising conclusion. MT