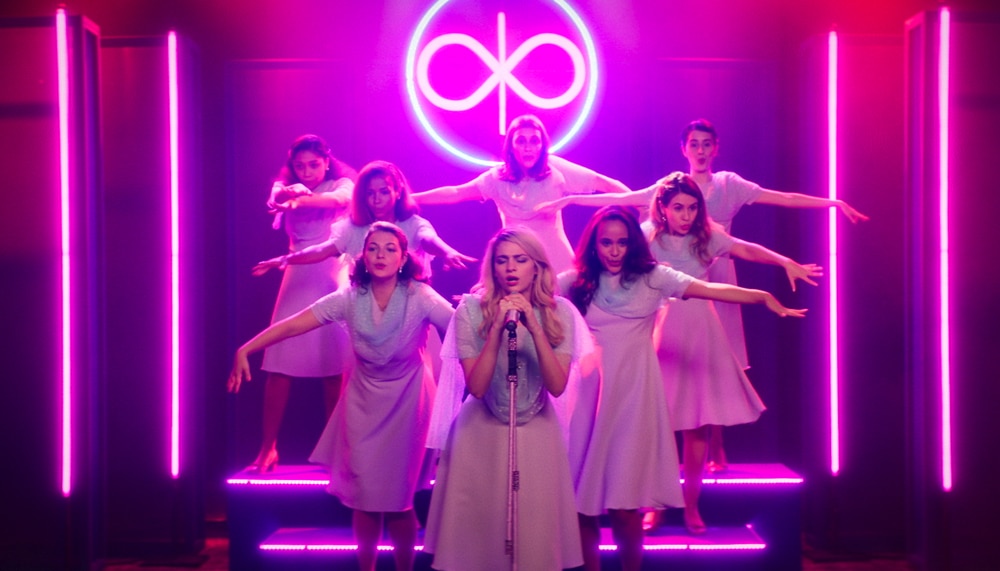 Woman are supposed to be the fairer and more gentle sex. But not according to Medusa. This psychedelic female-centric psychodrama makes florid use of magic realism to expose the rank hypocrisy still rife in modern day Brazil through a group of friends who pretend to be morally whiter than white. Of course, quite the opposite is true as we discover in this trenchant take down of hyper-feminism and religious devotion under right-wing president Jair Bolsonaro.

In her follow-up to Mata Me For Favor (2015) Anita Rocha da Silveira’s jagged sociopolitical satire is an eye-popping yet strangely serene selection of episodes that invite us to take a walk on the wild side with its unusual characters – mostly women – who occasionally break loose when they’re not being ultra demure. The reason is to attack other women who they consider  out of order on religious or moral grounds.

Medusa kicks off with a mob scene that sees masked women at war with each other, accusing them of debauchery, during a blackout in the north-east of Brazil. The women have a band, ‘The Princesses’, which preaches obedience to men and eternal love for God. The narrative is centred around the lead singer of ‘The Princesses’, Michele (Tremoroux), and newcomer Mariana (Oliveira). The men form a cabal called ‘The Watchmen’, clad all in bright green. The spiritual leader is the narcissistic Pastor Guilherme (Fragoso), who loves the sound of his own voice.

Mari sets out to find Melissa Garcia (Linzmeyer), an actress, who, some time ago, suffered an acid attack at the hands of ‘an angel-like woman’. Both have since disappeared. Bible reading and book-burning go hand in hand, whilst at the same time – in a contradictory twist – the women must be immaculate dressed and coiffured. Disfigured by a tragic accident Mari is then sacked from her job at the beauty clinic, and work in a sinister clinic caring for comatose victims of plastic surgery, where she falls for a male nurse Lucas (Fazao), even though he is one of the ‘wordy’ men because he enjoys sex.

But Guilherme suffers a heart attack whilst exorcising a demon stage, but is saved. Whilst Mari finds clues to what happened to Melissa, Michele becomes embroiled in a fight with members of her band, and falls into a pond. After a passionate kiss with Mari, a grand finale will answer some of the many open questions, after Guilherme asks Michele to marry her and the latter refuses.

Medusa is all about grand theatre: its shock factor fired up by a potent brew of horror and over-the-top performances. DoP João Atala has a field day with his roving camera in a film that overstays its welcome in the final stretch. Da Silva certainly drives home her message, but less would have been more. AS