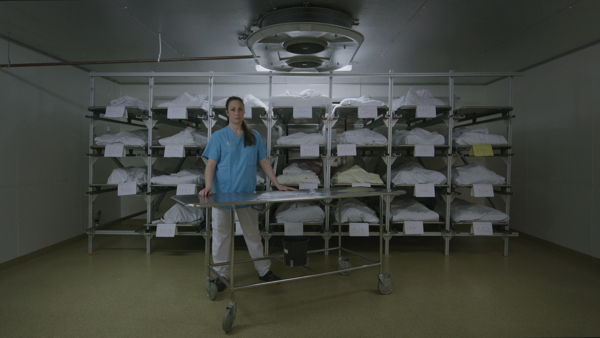 Clinically and with precision, a pine coffin is loaded onto a carrying device that takes it into the funeral parlour. Meanwhile a black limousine glides through the leafy suburbs of Swedish suburbia and a mortician puts the final touches to a corpse while listening to the weather forecast predicting rain. The banal fact of life is that death is a high tech business here in Sweden. Efficient, designer led and elegantly crafted as is Carl Olssen’s wry and timely look at the business of death

When we die, there are practicalities that need to be taken care of before our time among the living is finally over. Carl Olsson offers a factual and artfully framed overview of Sweden’s contemporary funerary industry in his calm and cinematic documentary that makes every step enjoyable and informative. Straightforward, fixed camera positions and placcid, symmetrical compositions satisfy our curiosity as a process that is rarely discussed and is still taboo in most European countries. Essentially a series of vignettes set to a cheerful upbeat occasional score, the film pictures every ritual and the routine procedures that accompany the transition. A bit more about what actually happens to the dead bodies would have been welcome. One bizarre scene pictures dozens of redundant funeral bouquets – all red and white – laid out in a gravelled area, brings sense to the familiar and sensible phrase: “family flowers only”. These will no doubt end up in the tip. Another meaningless job for these chipper funeral workers.

For those who work to make the process seamless, death is just a job. Banter is jovial and often irreverent as they go about their business, rehearsing music to accompany the service or discussing last night’s dinner or their family dogs, while they dig graves. These ordinary moments are interleaved with scenes of the elderly still going about their daily lives – or what’s left of them ; playing bingo or eating lunch. Meanwhile of Earth avoids sentimentality or pathos. Yet there are also moments of calm contemplation in this thoughtful and informative portrait of our final exit from this world. MT