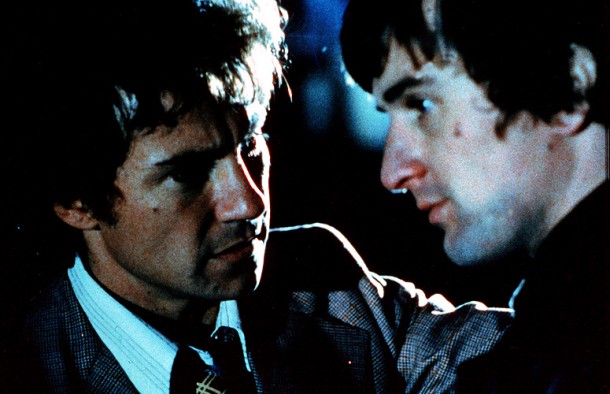 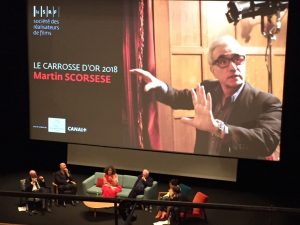 “You don’t make up for your sins in Church. You do it on the streets. You do it at home.  The rest is bullshit, and you know it”

Mean Streets was an autobiographical feature with Harvey Keitel’s character loosely based on Scorsese’s father’s relationship with his younger brother, played by Robert De Niro, who was always in and out of jail. Scorsese explores themes of responsibility and obligation, pondering where they end, and if they ever do in a society based on strong moral ties and close relationships, such as his own strict Catholic upbringing, in a tough working class neighbourhood of Queens, where he suffered from asthma. With no books or money, music and visits to the cinema became his abiding influences. In the film, he asks:. How do good people exist in a bad society, and can they still remain good surrounded by evil. Bad people, too, are often capable of extreme acts of kindness and generosity, so where do the boundaries lie? Most of his work closely examines his close relationships with other men, who were a particular feature of his own life, and he is most familiar with these male bonds: brother; cousins, fathers and friends.He is also interested in exploring compassion in society and how difficult it is to care for others who are challenging and cannot see the light, such as his father’s younger brother.

Before making a film, Scorsese generally locks himself away for 2 weeks and draws the entire thing on paper which he then shows to his DoP. He considers the minute geography of the film he’s working on, examining all the angles thoroughly before starting. His latest film has so many scenes, he has started working more closely with the actors, and making things comfortable for the them, often person by person.

Robert De Niro phrase YOU TALKING TO ME happened as a pure accident while they were rushing to finish a scene, but it’s become legendary. Another happy accident was Joe Pesci’s line: “ou think I’m funny? These all happened due to time constraints. There has to be laughs during the filmmaking process because the anxiety and tension of making the dark stuff is harrowing, he makes music films as a way of balancing things out. MT

Imagine being told by a fellow director you admire, that “you have just spent a year of your life making a peace of shit” – Martin Scorsese was told exactly this by John Cassavetes, after he’d watched Scorsese’s Box Car Bertha (1972). Cassavetes suggested that his next film should resemble his debut feature Who’s that Knocking at my Door? (1967), set in the Italian/American community in New York. Scorsese followed the advice and directed MEAN STREETS – the rest, as they say, is history.

MEAN STREETS (original title ‘Season of the Witch’) takes it title from a Chandler essay: “But down these mean streets a man must go who is not himself mean, who is neither tarnished nor afraid”. Based on Scorsese and Robert de Niro’s personal experiences in “Little Italy”, MEAN STREETS is a “passion play” – not only because of the religious undertones but also in the sense of the anger and violence displayed. Charlie (Keitel, who had starred in Who’s that Knocking) is in love with money, Teresa and God – in a constantly changing priority. But Charlie’s life is complicated by his best friend Johnny Boy (De Niro), a psychotic gangster who prefers to keep his cash for clothes, instead of paying back his creditors, who will eventually get their own back on him.  Charlie not only has to look after Johnny, he also has to hide his love for Teresa (Robinson), an epileptic girl, who happens to be Johnny’s niece. And then there are Charlie’s relatives, wanting him to take over the family restaurant – very much against his will. The violence escalates after Johnny insults the loan shark Michael once too often. When he, Teresa and Charlie head out of town for a holiday they are ambushed and a professional killer (Scorsese) peppers their car with bullets. Unlike Glenn Ford who comes too late to save his wife from the burning car, in Fritz Lang’s The Big Heat – which Charlie’s uncle is watching on TV; Charlie leaves the severely injured Teresa in the car.

Amazingly MEAN STREETS was shot mainly in Los Angeles, Scorsese – the crew only spent six days in New York. The physical and emotional violence is best symbolised by Jodie Foster’s child prostitute, Iris. Foster was just eleven at the time the film was shot, and her older sister Connie had to body-double for her in the sexually explicit scenes. MEAN STREETS is the key to all Scorsese’s crime films: metaphors and quotes have vie with the violence, the integrated score(often overlaying the fighting – ironically), seventies hits such as ‘Be My Baby’ and ‘I Looked Away’, religious themes and the lack of male engagement, leading to the brutal conclusion of total annihilation.

Whilst MEAN STREETS was not a success at the box office, the New York Times’ film critic wrote after the premiere: “No matter how bleak the milieu, no matter how heart breaking the narrative, some films are thoroughly, beautifully realised, they have a kind of tonic effect that has no relation to the subject matter. Such a film is Mean Streets”. Amen. AS