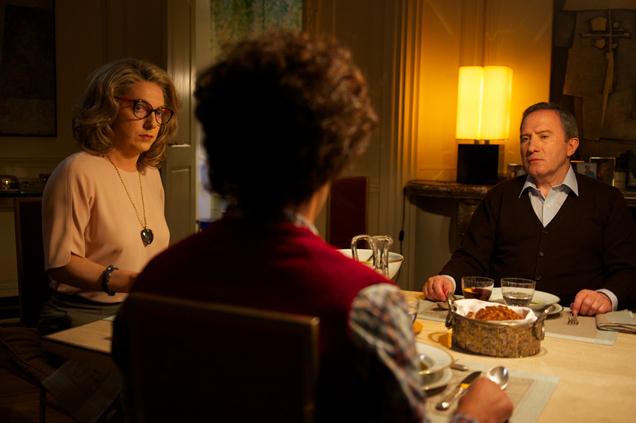 ME, MYSELF AND MUM (LES GARCONS ET GUILLAUME, A TABLE!)

The directional debut of actor Guillaume Galliene is a disappointing farce, treating the rather delicate issue of gender role confusion as a vehicle for a non-stop over-the-top romp of cheap laughs.

Young Guillaume (Galliene, who also plays his mother) grows up with his middle class parents and two loud and sporty brothers in Paris. His mother has withdrawn from life, usually reclining reading on her bed in daytime. Guillaume is not very fond of his brothers, which is hardly surprising, considering their boorish behaviour. He starts identifying with his mother and other women, copying them in movements and dress code. His father (Marcon) tries helplessly to stir his youngest into a more male role, alienating him even more in the process. Being sent to boarding schools in France and England does not help Guillaume’s estrangement from his own gender and after some unsuccessful pick ups in gays bars, Guillaume falls in love with the beautiful Amandine, marrying her and writing a play, in which he tells his life story.

Galliene , co-writing the script, leaves no cliché out: in a German spa-town Guillaume is getting an enema from a butch nurse, whilst the muscular masseur hurts his back. The director treats military boards and countless analysts Guillaume visits, with equally superficial jokes, the same goes his for clumsy descriptions of life in Spain and England. He succeeds in making fun of everybody in the worst possible taste, even making a mockery out of gay Arab men.

It is sad to see a contemporary director treating a serious issue in this way, denouncing everyone’s sensibilities (including  that of his own mother) to create a tawdry sit-com. AS