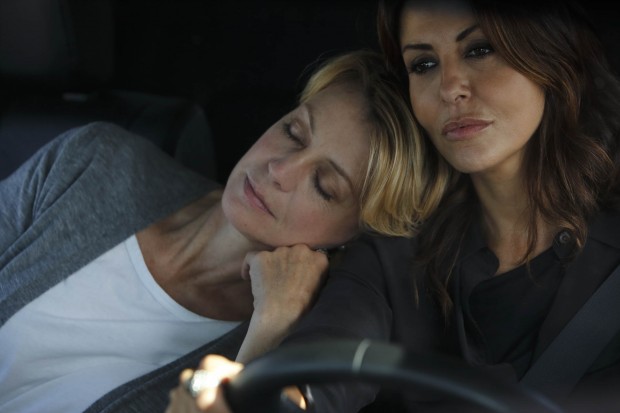 Me Myself and Her is an upbeat and sophisticated romantic comedy that provides a thoughtful addition to the growing mainstream collection of lesbian-themed dramas, although the ending is sadly rather predictable. With shades of Portrait of a Serial Monogamist (2015) and La Belle Saison (2016) it is award-winning Roman director Maria Sole Tognazzi’s second collaboration with Margherita Buy who is just the right person to play the rather sensitive Federica, a woman in her fifties who finds herself living with her friend, who is also a lover Marina (Sabrina Ferilli) after a long marriage to a man. The idea is based on a book by Ivan Cotroneo who also wrote the script for I Am Love (2009) and Loose Cannons (2010).

Early on in the film Federica states: “I am not a lesbian” and this pivotal statement leads to the crucial premise of the film – that sexual orientation can be a moveable feast, not a cast iron condition. At different times of our lives, the sexuality we originally identify with may be called into question as attraction and compatibility often surprisingly become more a feasible state of affairs, whatever the sex of the person we’re attracted to. Margherita Buy and Sabrina Ferilli (The Great Beauty) are believable as a couple of straight-acting and accomplished women who feel comfortable living together, and loving together also works for them in their middle age.

While Federica’s sexuality is morphing into a different sphere, Marina is on also entering a different phase of her life on a career level: a well-known actress, she is now running a restaurant that gives all its daily uneaten food to charity. The difference between them however is where the problems arise. Marina is the more assertive one of the couple and is happily open about their arrangement, even to the Press, and that’s something that makes Federica uneasy as she doesn’t really identify as a ‘lesbian’. And meeting up with an old boyfriend Marco (Fausto Maria Sciarappa), Federica finds herself in bed with him and starts to reappraise her physical feelings for a man. But the affair moves too quickly, as she finds herself trapped between two dominant characters – Marina on one side, and Marco on the other. And both want to take over her life. And Federica is not sure whether she loves Marina or prefers Marco, although these two sexual perspectives are not really examined in depth in Tognazzi’s rather freewheeling, carefree narrative. Marina is also grappling with a personal dilemma of her own: should she take a part she’s been offered in a film that may take her away from Rome, or continue with her successful eaterie.

Despite the rather unoriginal ending, this is a drama that feels really convincing from a relationship point of view. Tognazzi’s two characters are not driven together by toxic dysfunctionality, but by their comfortable attraction and compatibility with one another, which at the end makes for a more satisfactory midlife union that sexual fireworks and slanging matches. MT