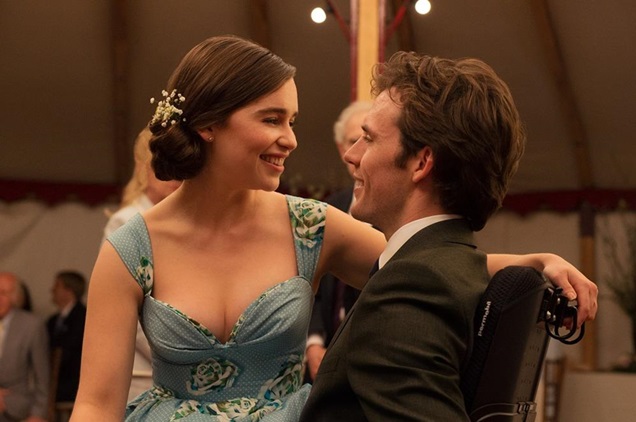 ME BEFORE YOU is a watchable British romcom that finds its way onto the big screen in Jojo Moyles’ adaptation of her eponymous chicklit bestseller where love blossoms across the social divide when a ‘bubbly’ young carer Louisa (Emilia Clarke) lightens the final months of dashingly dishy Will Traynor (Sam Claflin), confined to a wheelchair after an accident.

Paraplegic Will may be, but peripatetic he certainly becomes – thanks to Lou’s loving care and energetic enterprise. Desperate for work to support her unemployed family, she joins the well-heeled Traynor household in their magnificent English castle and gradually transforms her charge’s life from desperate drudgery to globe-trotting splendour despite a tough ending.

ME BEFORE YOU is a success largely due to strong and believable performances from the endlessly upbeat Emilia Clarke to Sam Claflin’s starry charisma – both have megawatt smiles and genuine charm. Janet McTeer and Charles dance provide elegant allure as Will’s wealthy parents and the Clarke family genial support – but quite why Lou is the only breadwinner in a five person home is never explained.

And life isn’t all singing and dancing in the Traynor household either. The bittersweet but shaky narrative hints at an unhappy ending despite the positive effect Lou has on Will’s self-esteem as a man. His parents are well aware that Will intends to head to Dignitas in six month’s time but once Lou works her magic with a range of uplifting outings to the races and beyond, the possibility that he will change his mind is hovering in the background. And sadly, so is Louisa’s cycling mad and inattentive boyfriend Patrick (Matthew Lewis) who clearly is a loser in the game of love, despite his sporting prowess.

Craig Armstrong’s original score and a selection of tunes from Ed Sheeran and Imagine Dragons keep the tone light-hearted despite tugging at the heart-strings. But ultimately ME BEFORE YOU is not about embracing the present or the future but an inability to let go of the past that eventually wins the day with the clear message that spiritual evolvement is not the driving force in the face of personal tragedy. MT

OUT ON RELEASE NATIONWIDE on 3 JUNE 2016