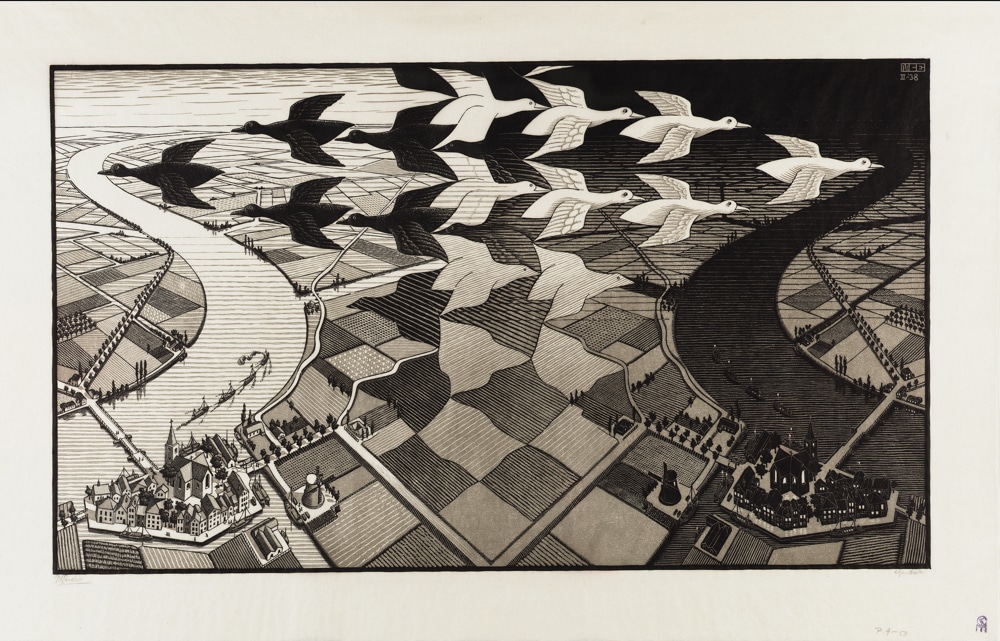 Like many before him Dutch graphic artist M(aurits) C(ornells) Eschen (1898-1972) came late to fame. But his influence, particularly in pop-culture, is still growing. This might seem to be a contradiction, since Escher was a modest creative who told his admirers he was not clever enough to be an academic and had to wait until 1970 for his first exhibition. But he doubted his artistic talents because he believed a ‘real’ artist should not enjoy his work but be tortured in creating it

Escher met his wife, 24-year old Russian émigré Yetta Umica, in Ravello in 1923. The couple married in Viareggio a year later and settled in Italy where Escher marvelled at the blue skies “colour was needed, but I did not want colour”. He often sketched at nigh-time although he maintained: “the reality of the day is like a dream”.

Escher and his wife travelled on a cargo ship to Valencia, paying their way with ten drawings, which the company used for advertising. They then travelled through southern Spain to Granada where he worked every day in the Alhambra. Escher was particularly struck by the geometric figures used by the Moors. Back home in the Netherlands he worked from dawn to dusk “so that the inner images came out”. One of his most famous drawings was of people living in the ‘second and third dimension’ but never meeting on imaged of stairs, one person going up as the other went down. Mathematics became increasingly important to his work leading him to pose the question: “Is it still art?”. But as son Jan comments, “work was opium for him.”

By now, the Germans had occupied the country, and Jewish artists could not exhibit any more. Escher cancelled his membership of the Artists’ Society and the Graphic Association. He rescued over two hundred drawings from his art teacher, one of the many deported to the death camps. When the wartime food supply dwindled Yetta sacrificed her own well-being, saving what little was available for the three sons.

After the end of WWII, she became more and more fragile and her mental health deteriorated. She would later travel to Switzerland and live with her son and his wife Liesbeth, but they eventually had to put her into a nursing home. She survived her husband who died after numerous operations for cancer.

MC Escher had been supported by his wealthy parents for most of his life, but an interview with ‘Time-Life’ in the 1960s raised the profile of his work and he became famous virtually overnight. One of his most famous concepts pictured people as wheels, rolling forward. When he listened to Bach’s St. Matthew oratorio, he imaged the cathedral floating over the ocean to New York and San Francisco. And this drawing with its psychedelic beauty found many admirers in the growing counter-culture, even though Escher had little in common with the flower-power generation.

Stephen Fry reads Escher’s letters as a v.o. Music by Bach dominates the feature, hardly a co-incidence since the composer himself admired mathematics. Escher was a certainly a person of substance and wild imagination, and deserves all the plaudits he gets after a life of self-doubt. AS