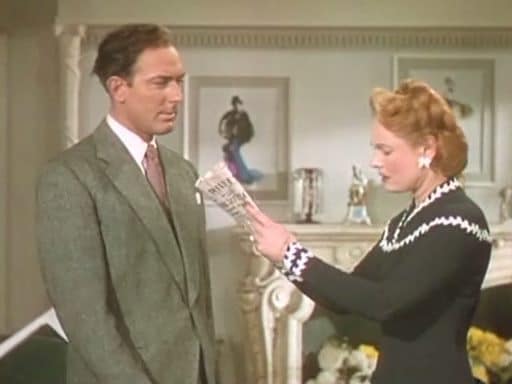 The reference to Sir Stafford Cripps in the opening foreword passes for satire in so light a confection; but also reminds us why there was a need for this sort of escapist fantasy seventy two years ago, with ‘Mr. Austerity’ in No.11 Downing Street.

Ravishingly shot in Technicolor and with clothes (designed by Hardy Amies, Norman Hartnell, Creed and Worth) probably consuming much of the film’s budget ; it’s otherwise played out in sets by William C.Andrews that look as if they’d fall over if you blew on them (it relocates to Paris for a few minutes courtesy of one hotel room and an incredibly phony-looking ‘outdoor’ restaurant), and the wind never disturbs the branches of any of any of the trees that adorn the very occasional studio exteriors.

Never mind, material this slight doesn’t offend the way that Wilcox’s flat-footed direction of more ‘serious’ subject matter does. Michael Wilding is fun overacting like crazy as a conceited jerk, Thora Hird is permitted to look incredibly glamorous as Neagle’s secretary; and it provides a unique opportunity to see “our old friend” Tom Walls in Technicolor playing an Irish police inspector presiding over a station so minimal it could have been designed for ‘Dr Mabuse’. @Richard Chatten