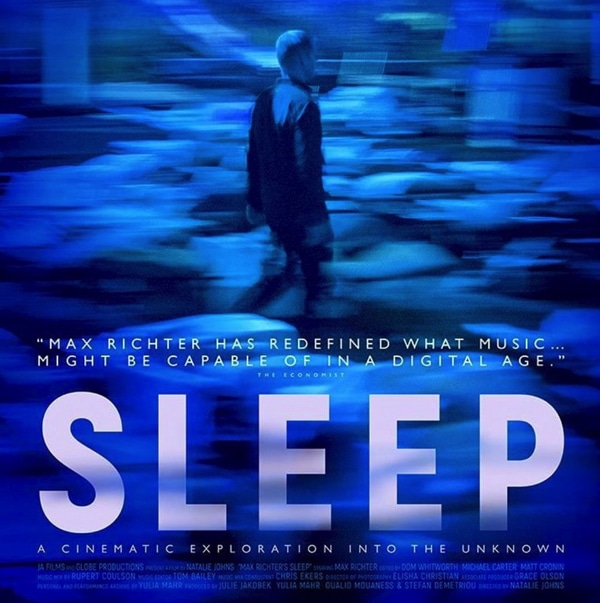 The composition was published by Deutsche Gramophone in 2015, and since performed at in-door arenas including The Amsterdam Concertgebouw, the Sidney Opera House and London’s Barbican; and was also produced by BBC R3. 215 pages of sheet music are testament of the first open night performance in front of 560 listeners/sleepers in their numbered cots.

German-born British composer Max Richter (*1966) and his partner in love and art Yulia Mahr comment on the history of the piece and this particular performance. Richter, who came up against the Classical Music establishment, finances his albums, heavy on synthesisers, like ‘Memoryhouse’ and ‘Songs from Before’ with over fifty film scores, the later being Ad Astra by director James Gray.

Richter calls SLEEP a work in the Lullaby tradition, and points to Indian music for over-night settings and the 1960ies Flux experiments. For the first seven hours, the music is mostly southing and very structural, but with the sunrise, the last hour is more vigorous, high-frequency, rather like a not so gentle alarm clock. Purple-ambient light dominates at this phase. Richter explains that SLEEP “should be seen as a piece which could work as a holiday reality from our data-saturated world”. Thus “the people sleeping are the story”. He emphasises that SLEEP “should not be listened too, but experienced, like a landscape one is in”. Which makes sort of sense, since Mahler seems to be one of the influences on Richter’s music.

Soothing and ethereal, the music brings out the best in the audience: there are back-massages and help with yoga exercises. One male member of the audience even writes a note to his partner: “Alice, I love you, and I am sorry that I am so often a shitty partner”. A French woman is rather more morbid: “Very strong, we almost felt death coming”. Overall, one has to admire the musicians, being on stage such a long time, only interrupted by a few breaks for drinks and sustenance.

DoP Elisha Christian takes much credit for her “light games”: always finding new angles to put the music into images, flitting from the sleeping audience to the panorama shots of LA. Particularly impressive are the slow transitions from night to day. Overall SLEEP is very much an elitist experience, a sort of quiet protest. Neuroscientists, who feature briefly appear, support the composer, who wants his music “to re-connect people, who have been lost in modernism”. Having said all that, with the average attention span being three minutes these days, an eight-hour experience might not be such a bad thing after all – elitist or not. AS