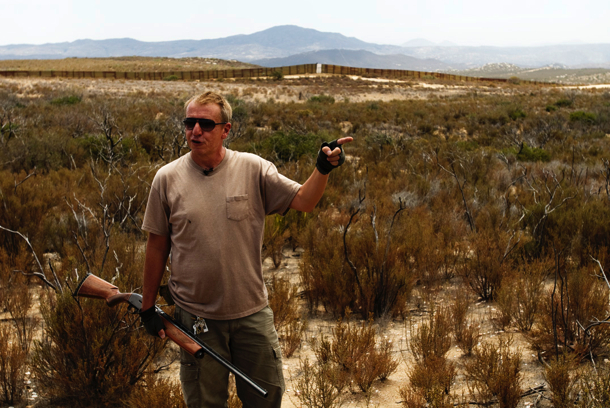 Max Kennedy is a ‘Minuteman’, part of a small group of white, middle-aged vigilantes, who’ve patrolled the USA/Mexican border since 2005, chasing illegal immigrants. They work in close contact with the official Boarder guards and are proud of the voluntary work they do for their country. They give themselves names like ‘Li’l Dog; or ‘Gadget’ and are friends with the ranchers on the American side of the border. Their motto is “Stop the cockroaches from coming over the wall”.

Max, who joined the Minuteman in 2007, comes from Brooklyn and proudly shows of a photo of himself as a hippie with a guitar. The interviewer is baffled, but Max opines that immigrant workers took his job and were responsible for the break up of his family. His wife had to have an abortion and that was the end of our marriage. “You know, they have to have control over their own bodies, these women”, he sniggers, showing that misogyny goes hand in glove with racism. Blaming the American public for his plight, he claims they are ‘gullible beyond belief’.

On the other side of fence, literally and figuratively, are the Mexican migrants, unrelenting in their pursuit of entering the United States. Sometimes there are shouting matches with loudhailers at the border: right wing politicians and Mexicans shout abuse at each other: one side wanting to keep their country white, the other one asking the Whites to go back to Europe, where they came from. In Mexico City, the film crew visits a “Rehabilitation centre for the Deported”. Some Mexicans have lived in the US for 30 years and are having to leave their families behind. Not surprisingly, they are hell bent on returning.

After 15 month of “service”, Max has enough and goes to Las Vegas, to work as a security guard. But an accident lands him in a wheelchair with a broken ankle. He is broke and returns to the Californian border with Mexico. “I am not a quitter”, he declares proud from his camper van, being back in service. The end credits show, that he is not a man of his word: since 2009 he has been living in California with his sister.

The greatest strength of the film is the Zutschi’s non-judgemental stance: the viewer does not really dislike Max, even though, we hear him make the most radical statements. Deep down he is not an evil person, but a drifter without a home – much like the migrants he persecutes. He can be witty at times, calling Las Vegas “A Disneyland for adults”. Sure, he kids himself, stating “that he has helped more Mexicans than he hurt”, but his actions are more the result of his utter helplessness. In a weapon shop, he behaves like a child in a toy shop, even though he has no money, he lets the sales assistant explain to him the all deadly merchandise – not really aware of the consequences the use of these weapons could have. He is a regressed child, dangerous on an infantile level, he has never grown out of.

The mostly handheld camera catches the emotions in close-ups, and shows the barbaric fences, which even manage to ruin the beaches. But like the tenor of the whole film, there is always enough distance in the images; to make us aware that there is no solution to this conflict. One cannot pick a side: this is a fundamental battle of two dispossessed groups. AS

WATCH MAX KENNEDY ON AMAZON PRIME, FANDOR (US) OR JOURNEYMAN FILMS STREAMING VIDEO PORTAL (US) WWW.JOURNEYMAN.TV AND IS SOON TO COME TO iTUNES, NETFLIX.