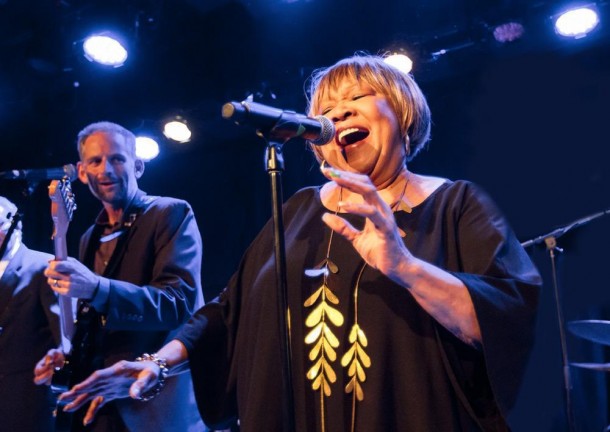 In her first feature documentary, director/writer Jessica Edwards charts the life and career of Mavis Staples, born 1939 in Chicago. Mavis started her career in 1948 as part of her father’s Gospel group ‘The Staples’, and later, after the demise of the group, as a solo entertainer still going strong today: after 65 years, the last thing on her mind is retirement.

Mavis grew up on Chicago’s South Side, sharing a neighbourhood with Sam Cooke and Curtis Mayfield. Her father, Roebuck ‘Pops’ Staples (1914-2000) had emigrated from the South, and it took Mavis a while to find out that whilst she and her siblings (brother Pervis, sisters Cleotha, Yvonne) were singing Gospel, Dad’s guitar was pure ‘Blues’ – he had not forgotten his Missisippi roots. And neither did he forgot his harsh upbringing in the racially segregated South, were black women had to cross the pavement when a white person was walking towards them.

‘Pops’ and the ‘Staple Singers’ got in contact with Dr. Martin Luther King during the American Civil Rights Movement at the beginning of the 1960s. Around the same time, Mavis and her family met the young Bob Dylan, not very famous then, and the “Staples” performed his “Blowing in the Wind”. Dylan fell for Mavis and asked for her hand in marriage. But nothing came of it. Mavis shrugs her shoulders today with the throwaway comment: “We may have smooched”. For his part, Dylan is a lively interview partner, full of admiration for the ‘woman who got away’. Mavis was only married for a short time in 1964, but, as she explains: “I had the perfect father, no man could measure up to him”. Today, on her single career which started in 1994, she is nearly always accompanied by her sister Yvonne, “who enjoyed managing the group much more than singing”. Mavis’ long career, which led to musical co-operations with Prince, among others, led to her first “Grammy” in 2011 for the album “You are not Alone”.

Edwards succeeds in showing the feisty nature of the singer right from the beginning, at a live concert in her hometown of Chicago, and later at the Newport Folk Festival. Old concert clips from the latter and Wattstax, show that Mavis has not lost any of her bubbly energy and her empathy with the concertgoers is as strong as it was in Sixties. Newsreel and TV clips give us a glimpse of the musical history of the USA; a few too many “talking heads” only succeed in getting Mavis! closer to a feature length running time. As is often the case, less would have been more: Mavis Staples is far too much a forceful personality and has more than enough talent – she does not need the hagiographic approach Edwards chooses. AS