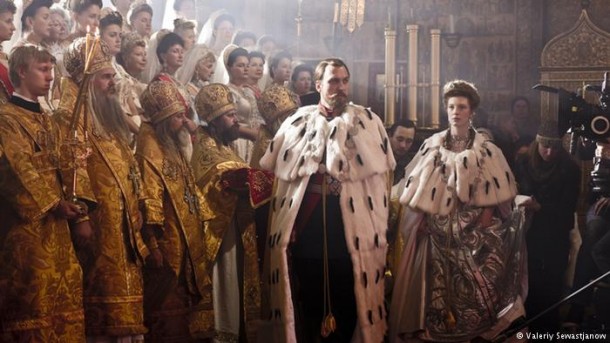 Aleksey Uchitel, whose work so far has oscillated between mundane crime dramas like Break Loose, and the pretentious and misogynist His Wife’s Diary, a biopic about the Russian writer Ivan Bunin, directs the script of Michael Katims and Aleksandr Terekhov very much in the spirit of the latter. The affair between the future Tsar Nicholas II and the ballerina Matilda Kshesinskaya (Matylda Krzesinska) is a pompous melodrama, a cross between the ‘kitsch’ of West German post WWII Sissy films and a second-rate James Bond extravaganza.

Set at the beginning of 1890, when 17-year old Matilda (Olszanska) was one of the stars of the Imperial Mariinsky Ballet in St. Petersburg, Uchitel shows the teenager as a heart-breaking tease, leaning on high-ranking officer Vorontsov (Kozlousky) to participate in a daring riding competition – just for a kiss. But the future Tsar (Eidinger) is first in line, and soon the two are so madly in love, that Nicholas thinks about abdicating. Whilst Nicholas father Aleksandr III (Garmash) is very much in favour of his son marrying Matilda, his wife Maria Feodorovna (Dapkunaite) favours a marriage to the German princess Alexandra (Wolfram) who has brought her confidant Dr. Fisher (Ostermeier) to Russia. He captures Vorontsov and tries, in an early version of waterboarding, to find out some secrets which might compromise Matilda. But Vorontsov overpowers the doctor, and leaves him in the tank – to be discovered by Alexandra, who dumps Matilda’s bloody ballet shoe into the water. Vorontsov, jealous and obsessed by Matilda, kidnaps her, and wants to die with her a boat full of TNT.

Uchitel is one of many directors portraying teenagers in love with men twice their age, showing them as predators. The reality, that these older men in power positions are coercing the young women, never seems to occur. Even Matilda’s few ballet scenes are shown in the context of rivalry with another ballerina. Apart from this, we see her in numerous forms of semi-undressed, being the object of male gaze of the director and DoP Yuriy Klimenko, who worked with Uchital on Break Loose. He wallows in slow-motion and sickly pink images, always objectifying Matilda. Apart from the ridiculous plotting, violence is as gratuitous as fare-fetched in its execution. Acting is straight from the 1950s, with the lines articulated with the earnestness of school children.

The real Matylda Krzesinska emigrated after the Revolution to Paris, where she founded her own ballet school in the 1920s, her students include Margot Fonteyn, Alicia Markova and Maurice Bejart among others. She went on dancing until aged 64, when she was on stage of the Royal Ballet Covent Garden at a Charity event. She certainly deserves better than this caricature of a film. AS