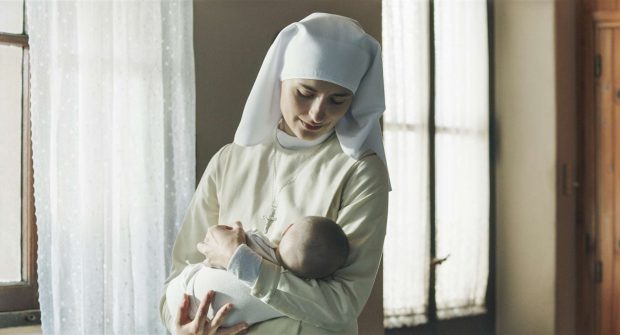 There are so many worthwhile features coming out of South America at the moment, particularly by women filmmakers, and Maternal is just one of them making its debut here at Locarno. With a cast of newcomers and a predominantely female crew, Delpero delicately explores the importance of secure start in life, and shows how this need not necessarily come from the birth mother.

Elegantly framed and quietly moving, Maura Delpero’s female centric story revolves around a group of frustrated teenage mums Lu and Fati who live in the calm confines of a religious shelter in Buenos Aires where novice Sister Paola has recently arrived from Rome to take her final vows.

Delpero quickly establishes the contrast between the lives of the nuns and their unruly counterparts who live upstairs. While the ‘morally loose’ girls have clearly fallen on hard times, and are unable to support their kids on their own, the nuns avoid judging them but are by now means easygoing, spending their time quietly in prayer, providing a stable environment where the kids can be looked after and given a Christian start in life. Pregnant Fati tries to keep herself to herself in the room she shares with the promiscuous tattooed Lu who has clearly gone off the rails and shows little interest in her adorable little daughter Nina. The other girls are vulgar, rowdy and competitive and although they are allowed to let off steam at ‘party nights’, they often come to blows which each other, to the exasperation of the nuns.

A bond soon develops between Nina and Paola who steps into to fill the maternal vacuum left by Lu’s absence – she is more interested in sexual exploits outside the Convent and leaves one night. Nina is very much in need of love and attention and a unsettling atmosphere gradually develops as she grows more attached to Sister Paola – now ordained – who has a moral obligation to stay neutral, particularly as Lu resents the growing closeness between the nun and her daughter when she returns.

As the story reaches its stunning denouement Delpero relies less and less on dialogue eliciting convincing naturalistic performances from her largely inexperienced cast. And the final scenes play out with extraordinary serenity given the brooding tension, as once again Sister Paola is put to the test. MT