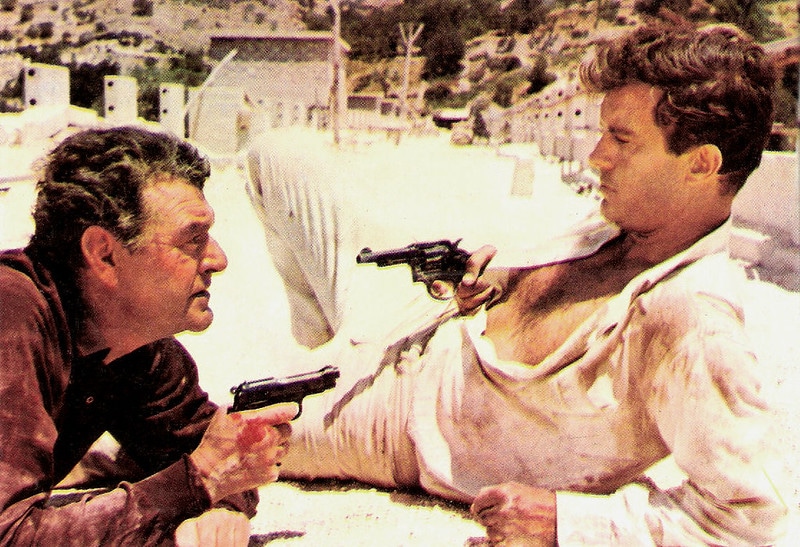 Like Graham Greene, the writing-producing team of Michael Relph and Basil Dearden interspersed ‘novels’ like Sapphire and Victim with ‘entertainments’ like The League of Gentlemen; and they never made an entertainment more entertaining than this, attractively shot in Technicolor on picturesque Spanish locations with a once-a-lifetime cast (the witty animated titles sequence contains the extraordinary credit ‘Also Starring Michel Piccoli, Bill Fraser’; while Jack Hawkins ironically shares scenes with Charles Gray, soon to become his regular screen voice when Hawkins tragically had his voice box removed).

Dearden and Relph had for ten years planned to film Victor Canning’s 1954 novel ‘Castle Minerva’, originally with Rex Harrison in the lead; but fortunately Cliff Robertson starred when the film finally got made.

William Goldman earned his first screen credit making the hero more American, and it abounds in cynical one-liners like “In my country torture is still legal” and “I’ve – got – scruples?” and a priceless breach of the fourth wall when a sequence both suspenseful and hilarious ends with Robertson staring into the camera and saying “Somebody up there hates me!”

It’s full of surprises – some scenes resemble North by Northwest directed by Fellini – and in a scene worthy of Hitchcock an abduction is carried out in full view of a circus audience laughing uproariously. @Richard Chatten