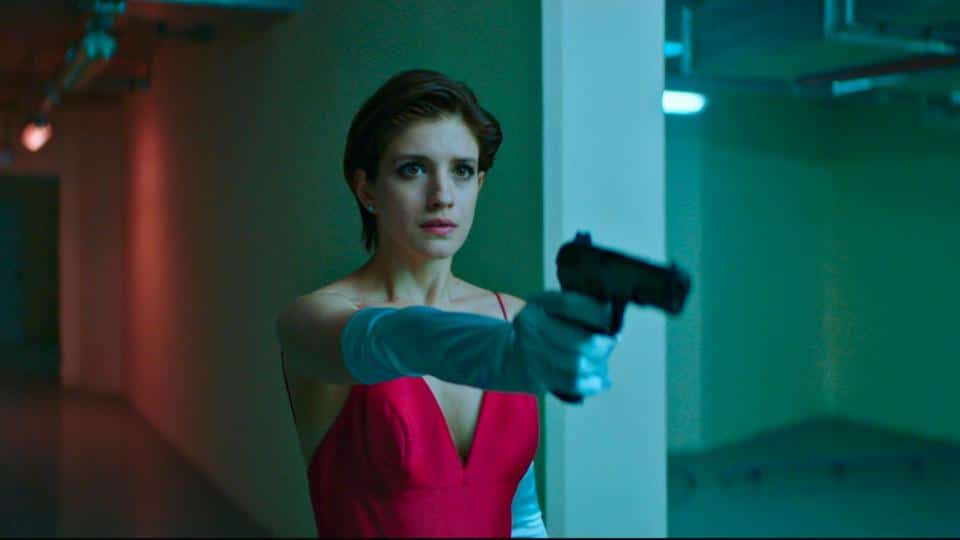 This first feature from Russian writer/director Anastasiya Palchikova is a thinly veiled critique of the nation post Stalinism, wrapped up as a crime/revenge story. The director takes the forces to task in creating a society riddled with violence where Putin and his oligarchy cronies rule with impunity given the lack of a legitimate opposition.

We meet Masha (Gukhman) just before her thirteenth birthday; she lives in a small Russian town and is the darling of her uncle (Sukhanov), who is a crime lord, involving his sons and other relatives in all his schemes from robbery to murder. Masha, a gifted singer, has the family in thrall – and when school friend Sergey ignores her approaches, she asks Uncle’s sons to beat him up until he relents and offers her the attention she craves. But Sergey has also got mixed up in the family business and will later pay with his life for getting out of his depth.

Uncle is very critical of Masha’s mother Nadya (Lebedeva), who has married outside the clan, and has left her husband while remaining a close friend. Nadya wants to take Masha to a relative in far away Samara, but Uncle does not want to give up control, and asks his son Andrei (Mizev) to burn Nadya’s flat down, killing Nadya’s husband in the process. And he’s not the only one sleeping there.

The end is set in Moscow where a grown-up Masha (Chipovskaya) gets ready for a performance with Uncle, Andrei and other family members are in attendance, getting rich on the spoils of the now legitimate music business. But Masha has not forgotten.

Polina Gukhman carries the feature as Masha the 13 year old whose uncle and sons fulfil her every wish, the big family cushioning her from the big wide world. Violence is the norm for her – but the victims are always the ones fighting Uncle and his clan. Only once is the order disturbed, when one of Uncle’s relatives is killed by a rival gang, having raped an under aged girl. Told from the POV of Masha, for whom Uncle is a sort of God granting her every wish, this is a study of a regressive dog eat dog world, where violence holds sway. In Masha’s infantile understanding of the situation, brutality is just part of getting what you want – just ask Uncle whose soft spot for her (rather like the Kray twins for their mother) contrasts with his harsh treatment of all others, including his wider family. DoP Gleb Filatov’s harsh realism is sometimes hard to bear, but never gratuitous in showing how casually normal this hostile environment is for an adolescent like Masha. But Uncle’s little Princess would grow up one day. AS

MASHA is showing as part of the London Russian Film Festival, currently being held for the first time in the UK – from November 12 to December 10, 2021. New customers can enjoy the festival films as part of an extended Subscription free trial on BFI player using the voucher code RFF21.