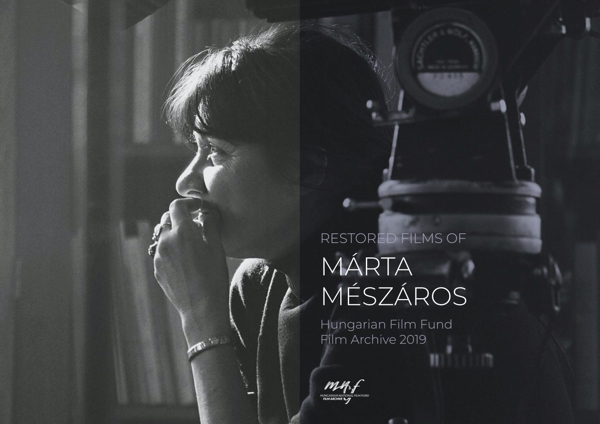 Márta Mészáros occupies a unique position in Hungarian and world film history. The director, Kossuth and Prima Prize laureate, winner of awards at the Berlinale, Chicago, Cannes and many other international film festivals, is in herself a historical legend. Together with her contemporaries Agnès Varda, Larisa Shepitko e Věra Chytilová, she ranks as one of the most significant female authors in the world.

Even as a young child she had struggled with being orphaned, with hunger and the vicissitudes of history. She was born in Budapest in 1931. Her father, the avant-garde sculptor László Mészáros, in fleeing fascism moved the family to Kirgizia, where on the outbreak of World War II he fell victim to Stalin’s purges. Her mother also died. She was placed in a Soviet orphanage and only returned to Hungary after the war.

Between 1954-56 she studied at the film academy in Moscow and until 1968 she made Romanian and Hungarian documentaries. These autobiographical motifs inspired the Diary series that garnered considerable international acclaim.

Hungarian writer/director Marta Meszaros (*1931) chronicles a decade of Hungarian social history (1947-1958) in this autobiographical trilogy of just under six hours, where she is represented by the teenage character Juli. Meszaros actually made a fourth feature, Little Vilma (Kisvilma – az utolso naplo) in 2000, which runs along similar lines but its realisation differs from the original format. Of the three Diary for my Children is by far the most impressive, winning the Grand Jury Prize at Cannes in the year of its making. The colour versions of Diary for my Lovers and Diary for my Mother and Father, descends into simplicity, with Meszaros losing her objective documentarian’s viewpoint. All three parts were shot by DoP Nyika Jansco, her husband Miklos Jansco’s son from a previous relationship before their marriage which lasted from 1960 to 1973.

In 1947, teenage Juli (Czinkoczi) arrives in Budapest from exile in Moscow to stay with her foster mother Magda (Polony), and her grandparents (Pal Zolnay/Mari Szemes). Magda is a member of the Communist Party, courageously opposing Nazism and Stalin, but recently her opinions of the Communist set-up have softened. Most of her friends have mixed views about her political affiliations. Old friend Janos (Nowicki) disagrees with her stance, her flatmate Judith Kardos (Margitai) more or less supports her. Juli’s mother died during the war, and her sculptor father had been imprisoned during one of the purges in the late 1930s. So she takes a dim view of Stalin, suspecting he may have had a hand in her father’s ‘disappearance’. The dynamic of these relationships forms the rich backcloth to this intimate character study.

Juli idolises Janos as a father figure. In her dream sequences, Janos actually becomes her father, working in a huge quarry. Much later, when Janos is married to Ildi (Bansagi), she also is the same person as her mother in Juli’s dreams. Not one for school, Juli does steals Magda’s cinema pass and discovers the classics: She identifies with Greta Garbo in ‘Mata Hari’, and make a fancy dress of her idol. But Juli has a harsh side, treating her boyfriend meanly by refusing to sleep with him. Janos gets arrested for “sabotage” in the factory he is working in, but he buys his freedom, denouncing a co-worker – and also relying on Magda’s help “for the sake of the old days”. Finally, Juli is thrown out of the school and has to work in a factory before she moves out of Magda’s flat, to live with Janos and his son (Toth), who has to spend his days in a wheelchair. 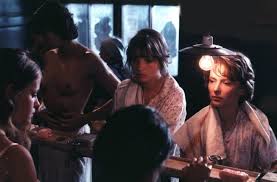 Diary for my Lovers starts in 1953 and explores her sexual forays in Moscow. Juli has gone back to school and is chosen (with some help by Magda) to study economics but then has a change of heart, talking the Russians into letting her swop places with a young Hungarian whose dream to be an economist gives her the opportunity realise her own wish to become a filmmaker. At film school she meets the glamorous actress Anna Pavlova (Kouberskaya), who has a relationship with an older and senior party functionary. She also discovers how her father met his fate and angered by the revelations she decides to go home when the  1956 revolution breaks out in Hungary, despite becoming emotionally close to Janos and his son. Back in Budapest Magda has joined the security forces is nearly lynched during public unrest.  by the revolting citizens. Ildi asks Juli to flee to Vienna with Janos “and keep him there.” But they end up in Budapest.

This begins with a New Year’s Eve party in Magda’s flat, celebrating the end of a traumatic 1956. Magda and the Party have regained power after the Russian invasion, and Juli, who is working for the newsreel section of he Party, comes to blows with her mother. Janos is now part of an independent worker’s union in the factory, and convinces his co-workers not to give in to the regime, and continue their strike. But this all ends in a gruelling drawn-out tragedy

Meszaros combines the opposing forms of documentary and fiction, the film’s aesthetic and narrative becomes a notion of film as art, entertainment and record. The quasi documentary style and the inclusion of archive footage is a clear reflection of earlier Meszaros films. And this is all conveyed in the subtle acting performances, which remind us of Rossellini’s work in Italian Neo-Realism. We become attached observers, looking in from the outside as flies on the wall catching snippets of conversation at the dinner table, when working conditions in the factories are discussed, before Juli escapes into her dream world. There is a quietly devastating sequence with Juli sitting alone in the room after her grandfather has scolded her for bring up the story of her father’s tragic disappearance. A recurring dream imagine her father in the quarry; and we even get a glimpse of her as a child – her voice echoing as she calls for her father. Lacking a family in the traditional sense, she invents her own: as one where only Janos will discuss the past. Juli’s real world is the cinema.

Zsuzsa Czinkoczi gives an astounding performance considering she was only fifteen-years old when the film was shot. She dream-walks through the six hours, never putting a foot wrong. Subtly evoking tone and pace, and her life and circumstances change. Anna Polony’s Magda is a study in ambivalence. Both she and Juli somehow need each for a time: Juli to get to film school, Magda to repress her guilt regarding the death of Juli’s father. But they start out more or less on an even footing: life choices see them move farther apart. The truth here is that any totalitarian regime – rather like a religion- is extremely demanding of its believers, Magda becoming someone she didn’t set out to be. The only way out is total emotional rejection of the status quo, which Juli achieves in the end – but not before she entertained the idea of a silent truce with the system.

Whilst Meszaros always refused to be called a feminist, she was one of the first women directors who won major awards, and she was the first ever female filmmaker to win the Golden Bear in Berlin 1975, for Adoption. AS