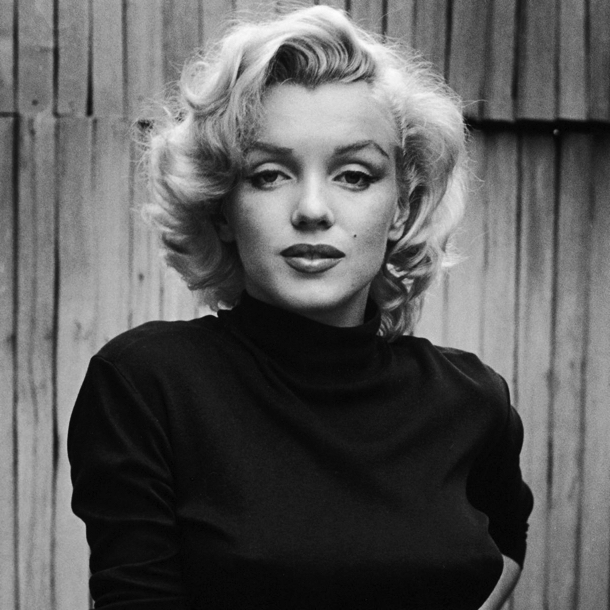 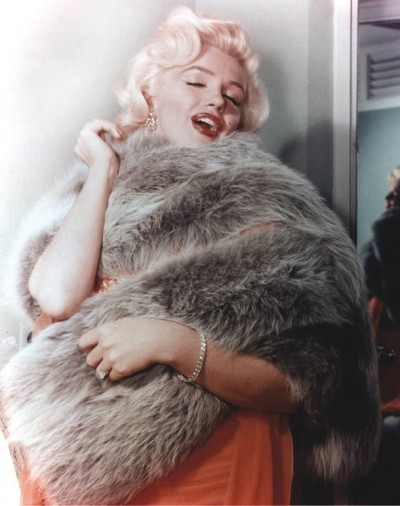 Marilyn Monroe’s success in the Hollywood firmament was built on a ruthless control of her own image: and whilst the myth would suggest that the Studio controlled her success, it was Marilyn herself  who ultimately called the shots. And there were always enough men around to help achieve her aims. When she finally collapsed under the burden of stardom, she had successfully fashioned her profile for her own profit and that of the studios.

First of all, there was the Russian born Johnny Hyde (1895-1950), vice-president of William Morris’ West Coast office. In spite of being 31 years older than Marilyn, he wanted to marry her, and left his wife. He negotiated Monroe’s contract with 20th Century Fox, which lead to her having small, but noticeable roles in All About Eve and Asphalt Jungle. In the first one, she plays a dim-witted actress, seemingly wiling to sleep with anybody who would be of use to her. For five years Monroe would play roles which were just a variation on this theme. But, much more importantly, Hyde arranged for a portrait of her in ”Photoplay”. By this time, she had already been on the cover of both “Look” and “Life’ magazine. But her “Photoplay’ profile played up her vulnerability and loneliness and, of course, underlined her troubled past. Crucially, it stressed her lack of female confidantes, an important point, since female audiences were still not sold on Miss Marilyn Monroe. In confessing her need for female friendship and solidarity, Monroe made a direct appeal: “There’s a thing called society that you have to enter into, and society is run but women. Until now, I’ve never known one thing about typical ‘feminine activities’”. 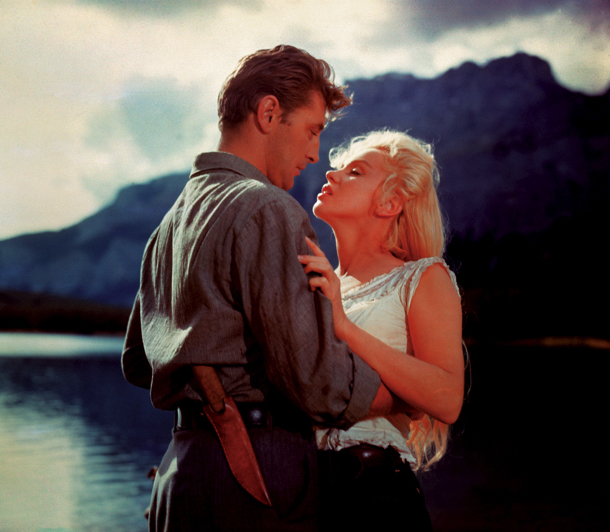 In calling for the help of ‘her sisters’ Marilyn Monroe, and the studio, made a strong bid to change the male bias of her audience. Her self-confessed “vulnerability and innocence” helped this process on the way, films of the mid-fifites  like Niagara, Gentlemen prefer Blondes and How to Marry a Millionaire made her blossom into a fully fledged star.

In 1948 Monroe had posed naked for the photographer Tom Kelley for “Golden Dream” calendar. And these photos had been reprinted in other girlie calendars. When she was a star in the making, she offered appealing reasons for posing in the nude: “I was hungry”, “three weeks behind with the rent” and, “Kelley’s wife was present”. Obviously, the real money came from the reprint as a centre-fold in “Playboy”. But her ‘honesty’ was well-received and this clever attitude meant that her image did not suffer greatly. 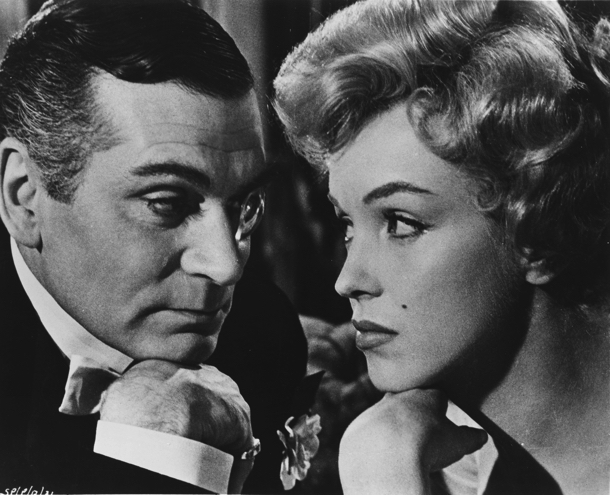 Her marriages to Joe DeMaggio and later Arthur Miller, were handled by her and the studios to maximum effect. Again, “Photoplay” was helpful in creating the image of Monroe after her marriage to the ex-baseball star: “At home their lives were as ordinary as any couple’s in Oklahoma. Monroe slips into an apron and begins opening cans and getting things ready for the big fellow’s dinner, which she cooks with her own hands”. Another magazine described her life style, as calling for “candlelight on bridge tables, budgets and dreaming of babies – simple, plain domesticity”. Monroe adding herself that “Joe doesn’t have to move a muscle. Treat a husband this way and he’ll enjoy you twice as much.” The reality looked different, during their honeymoon n Japan, Monroe left DiMaggio for Korea, where she appeared in ten shows for the serving GIs. A month later, Wilder let the public watch the famous “air vent” scene for The Seven Year Itch, and the enraged DiMaggio soon filed for a divorce. 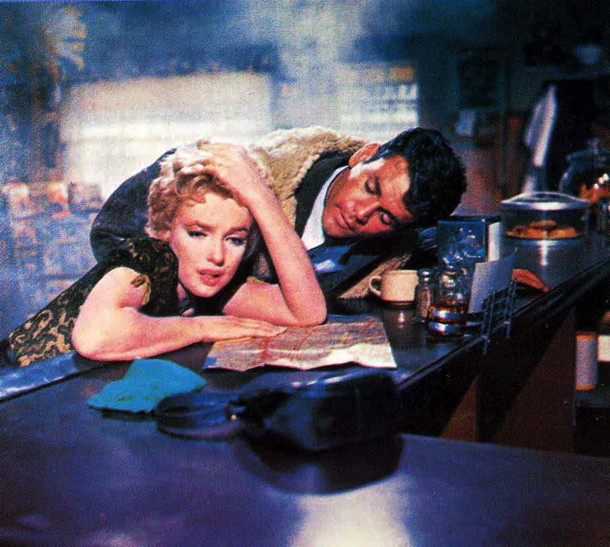 In 1953, Monroe rebelled against the studio, she did not want to appear in the dim song-and-dance film The Girl with Pink Tights. Suspended by Fox, Monroe with the assistance of Milton Green (1922-1985), a photographer and PR agent, formed her own company ‘Marilyn Monroe Productions’. Fox gave in, and Monroe returned with a better contract, and a fine role in Bus Stop (1956), for which she received the best reviews of her career. During this time she met the playwright Arthur Miller. The gossip industry soon invented the new Monroe. Turning up for the press conference for her new production company wearing a full length ermine coat, signified better than words how serious she was about her art and her new marriage. Real life again has been re-invented: Monroe and Arthur Miller split up even before the shooting of The Misfits (their common project) began, Miller meeting his new wife during the shoot. 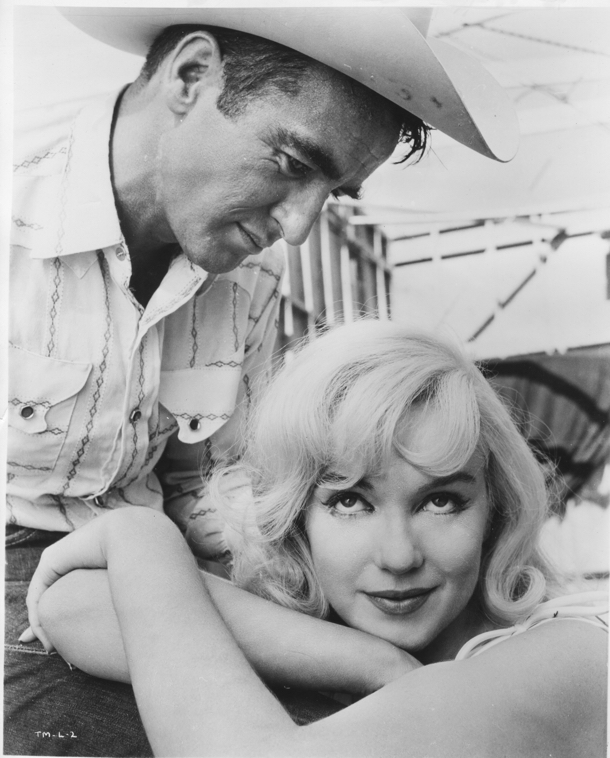 Marilyn Monroe was adept at being her best PR agent and stylist, she played the press more often than the other way around. The “Saturday Evening Post” was perhaps best in projecting her persona: There was the ‘Sexpot” image of the early 50s, followed by “frightened Marilyn Monroe, after the publication of her childhood history and than the “new Marilyn Monroe”, the legend, a composed and studied performer”. Whilst the ‘Legend’ was draped in furs, and responsible for the ‘Monroeism’, the ‘Woman’ herself was still shy, hesitant, removed and terribly lonely. AS/MT