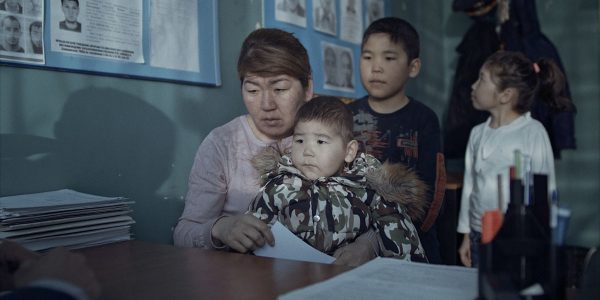 Sharipa Urazbayeva’s directorial debut is a re-imagined drama based on reality and takes place in the windswept snowscapes of her homeland.

Stunningly filmed and convincingly performed by a cast of non-pros, Meruert Sabbusinova plays the lead character of Mariam fighting for survival in the remote Kazakh Steppe after her husband disappears and is presumed dead. Zhanash is resolutely a man’s world. Cut off from civilisation and 400 kilometres away from Almaty, her eldest son – who is about 12 – starts to assume his role as the head of the family now his father is gone. Because there is no body, he cannot be officially declared dead.

Mariam has to look after her young children in a home without light or water, running the small-holding and tending the cattle renting from the local farmer. Mariam cannot receive any benefits until her husband’s body is found and so she has to relinquish control over the animals and faces starvation. But providence comes to the rescue and a chance meeting soon improves her life considerably, until the past comes back to reveal how empty her existence was prior to her husband’s disappearance.

Mariam is a disarmingly simple but enjoyable film and Urazbayeva tells the story with minimal dialogue. The director met Sabbusinova via a news story she was working on for a local TV network. After looking for an actress to play the lead, she eventually decided that Sabbusinova was best suited for the part having experienced the lifestyle. Filming took place over a week allowing the crew to convey the harshness of life in this remote location dominated by men.  It’s quite shocking to experience the hardships and privations the locals face everyday in a society where women have literally no standing or power to determine their own lives. Talented cinematographer Samat Sharipova captures the wide open spaces of the Steppes allowing us to enter a world that seems so beautiful but also so hostile to those who have to make it their home. MT