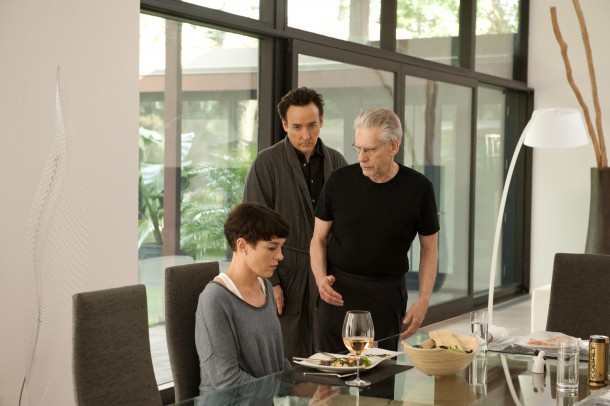 MAPS TO THE STARS is a bitter and snarky LA-set satire with Cronenburg’s classic brutal flourishes and scripter Bruce Wagner’s witty one-liners mostly delivered by John Cusack as a self-centred, self-help guru, Dr Stafford Weiss. Julianne Moore works her wonders as a hard-bitten, neurotic bitch Havana Segrand, relentlessly chasing fame and celebrity in a performance that won her Best Actress at this year’s Cannes Film Festival.

In Hollywood, the Weiss family live in a bland, modernist house  – Dr Stafford’s books have made him a fortune, and his odious wife Cristina (Olivia Williams) spends her time over-parenting their thirteen-year old son, Benjie (Evan Bird), an obnoxious and self-possessed child star. Their estranged daughter Agatha (Mia Wasikowska) has recently been released from a psychiatric hospital after setting fire to the family home. Agatha is now back in circulation as Segrand’s PA and desperately seeking a reconciliation with the family who understandably disowned her. She’s also in a liaison with Robert Pattinson, who mumbles his way through as a wannabe star cum chauffeur. Segrand

This is Film Noir at its bleakest and most weird and, apart from the odd stab of humour, should carry a Government Health Warning: two hours in the presence of this spiteful smorgasbord of characters who parade their sordid lives before us like human incarnations of the World’s Most Venomous Creatures could well send you into detox therapy. As we gradually we sink with them into their sad morass of selfdom, Cronenberg’s signature frigid interiors and unfriendly locations complete a cool-lensed picture of Hell. If this is contempo LA, then take my advice and catch the first plane home. MT