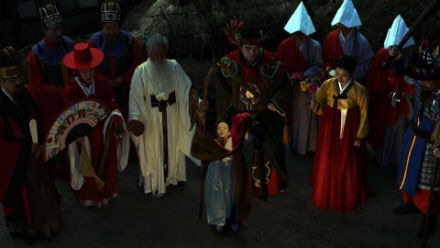 When principal photography on MANSHIN was finished, the production run out of money and the film could only be finished after an extensive funding drive. The result is overwhelming and absorbing, even though one has to suspend belief in rationality and modern life for the entire length of film.

The central character of MANSHIN is Kim Geum-hwa, 83, the national Shaman of South Korea: her life story is performed by three different actresses covering the different phases of her life. Whether or not you can engage with her initiation and exorcism rituals performed on land and often on ships, these magnificent ceremonies with their piercing music are astonishing and unlike anything seen before. As far as the overall concept goes, it becomes clear that Kim is an evangelist  who, with the help of her many spirit guides, brings her followers into contact with friends and family members who have passed over to the other side. This collective approach to a spiritual otherworld is much more humanistic than that of the more mainstream religious concepts which rely on a single, more or less wrathful higher being who has to be obeyed at any price. One could say that Kim and her followers have taken a holistic and artistic approach to spiritual well-being.

Kim is now a respected figure throughtout the World but this wasn’t always the case. Even as a child, Kim was ostracized by the people in her village after she predicted the early death of the father of one of her friends. Later on, she was persecuted by various military dictatorships in South Korea, who tried to repress her rituals. The images, some of them in monochrome, are an extremely striking portrait of a very violent society.

Warching these traditional Korean spiritual rituals and listening to Kim requires a certain suspension of disbelief, of buying into this mystical world and learning to accept the spirit medium’s life on its own terms – but for this we also require a different concept of time. If MANSHIN teaches something, it is this concept of interlocking time levels, acted out in rituals that take over our entire being and existence;  becomimg a way of life. AS