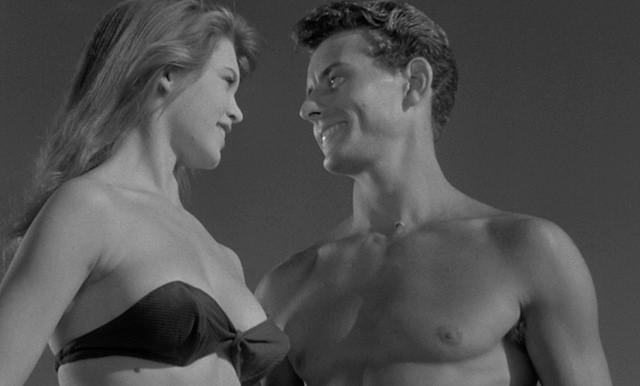 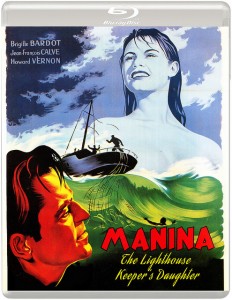 Also known in the UK/US under the title The Girl in the Bikini, this was 17y-ear old Brigitte Bardot’s second feature. The same year, after turning 18, she married the director Roger Vadim, and the rest, as they say, is history.

Director and writer Rozier had a long, but not very distinguished career, directing 38 features between 1938 and 1976, of which 56 Rue de Pigalle is the best known. Manina is, apart from Bardot’s striking screen personality, quiet ordinary for its time. Mature student Gerard (Calve) listens to a lecture about a hidden treasure off the coast near Ajaccio: gold coins, worth a fortune, are hidden in amphorae, after the ship carrying them way back in Phoenician times, sank. Gerard remembers diving near the rocky island of Levezzi five years ago with friends, and finding such a amphora. Not liking his law studies very much, he decides to become rich, borrowing money from friends to finance his expedition. In Tangiers, he makes the acquaintance of the smuggler Eric (Vernon), whose boat they will use to recover the gold coins. After a tediously long evening in the cabaret and a subsequent brawl, the two set out with Eric’s men to Levezzi. When they meet Manina, Eric remembers her from his last visit, but is stunned, that she has turned into a luminous beauty. Manina also sings (Bardot would record over 80 songs in her career), is very agile on the high and dangerous rocks, from which she jumps like a fish into the sea. She certainly has all the mysterious qualities of a mermaid, and Gerard falls in love with her. Eric too makes an attempt to kiss her, but is rewarded with a hefty slap. Finally, Gerard finds the amphorae with the coins, but Eric has his own agenda.

It is impossible not to be fascinated by Bardot, the moment the ingénue appears on the screen, one forgets the tedious plot, she is simply stunning, fully dressed or in a bikini. She seems not to act, but fro locks around the mountains, as if she had always lived there. It is in her nature, to be what she role demands. As one can see in films, where the director took her serious, and not used her as sex-object, like Godard or Clouzot, she could easily carry the film – but even at the beginning of her career, Bardot had all the talent to act out all nuances of her screen personalities. Whilst mostly careering around in full speed in Manina, Bardot, literally, hits the right notes with her sad songs, and her devastation, when Gerard nearly dies. She simply was a natural actress – the rest is male projection and publicity. AS

MANINA IS NOW OUT ON BLURAY COURTESY OF EUREKA CINEMA | AMAZON.CO.UK