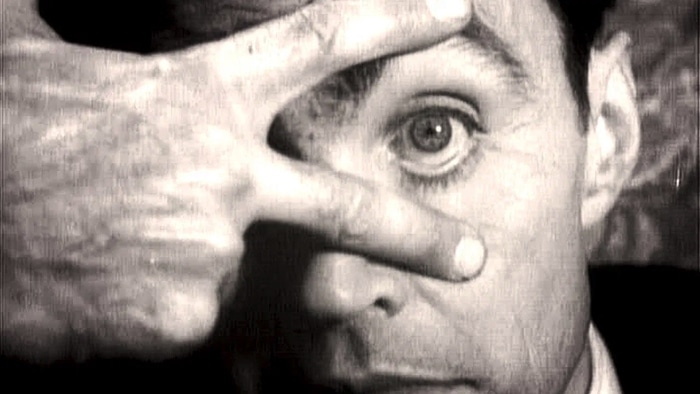 Although copyrighted in September 1934, Maniac feels as if it were made five years earlier, both technically and in its extraordinary subject matter; the latter because it was never intended to be exhibited by any of the major theatre chains and thus beyond the reach of the newly enforced Production Code.

To watch Maniac is as if the Production Code had never happened, as it abounds with such brazen flouting of the Code as four young girls sitting about in their underwear discussing current stories in the press in surprisingly highfalutin’ language, a couple of fleeting glimpses of bare breasts, eye-watering and jaw-dropping violence such as a scene involving cruelty to a cat lifted (along with much of the rest of the plot) from Poe’s ‘The Black Cat’ and a remarkably energetic, hair-pulling, clothes-ripping catfight in a cellar between Thea Ramsey and Phyllis Diller that escalates from hypodermics to a baseball bat. (Ms Diller – whose name regularly provokes comment – as the scheming Mrs Buckley is an elegantly dressed, bun-faced middle-aged woman who sounds as if she’s reading her lines off cue-cards and couldn’t less resemble her much younger namesake.)

Crudely made but with a nodding acquaintance with rudimentary cinematic technique, this film is obviously cheap but far from inept. The veteran editor William Austin makes competent use of cutting and dissolves (as well as footage apparently lifted from Maciste all’Inferno), the laboratory scenes are actually quite good-looking and reasonably competently framed and lit by cameraman William Thompson (who also shot Plan 9 from Outer Space!), there’s a satisfactory amount of outdoor photography (although the night scenes are far too dark), including exterior shots of the back yard of a Hollywood bungalow, and the climax looks as if it’s shot in a real cellar.

The script is by the director’s wife Hildegarde Stadie, and she plainly knows her Poe, who is actually name checked at one point. Some of her dialogue is also quite a salty commentary on modern life, like the exchange between the two embalmers: “between the gangsters and the auto drivers, we won’t need another war to carry off the population. You didn’t even mention the suicides”. A lot of the humour is plainly blackly intentional, like the neighbour discussing breeding cats for their furs while feeding them on (and to) rats.

One narrative device that heightens the film’s rather archaic Pre-Code feel is its use of intertitles which periodically interrupt the plot to describe various abnormal mental conditions (all of which sound applicable to the former incumbent of the White House). Plainly fig leaves to maintain the pretence that the film has a Serious Educational Purpose (and accompanied by the only music in the film, apart from the final movement of Tchaikovsky’s Sixth over the opening credits), normally this medical stuff would have been delivered at some point by an actor pretending to be a doctor, but here it’s done with passages cribbed from medical publications. One of these conditions, Dementia Praecox, was a quarter of a century later the condition Elizabeth Taylor was diagnosed with in Suddenly Last Summer and compared by Katherine Hepburn to an exotic bloom (“Night-blooming Dementia Praecox”) in a purple passage that wouldn’t have been out of place here. @Richard Chatten

MANIAC IS ON PRIME VIDEO