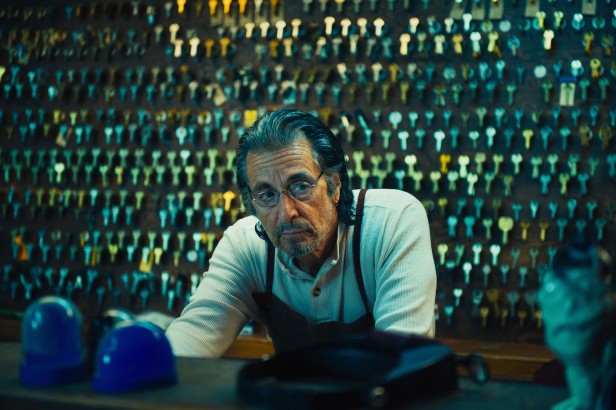 Director David Gordon Green seems to specialise in redemption movies: in 2013 he cast Nicolas Cage in the title role of Joe, a hard-hitting and drinking man who wants to save a young worker to replicate his own fate. Here too, Al Pacino’s small town locksmith AJ Manglehorn is certainly a boozer, but his violence is of the psychological kind: he is ageing very ungracefully, rotting from the inside, whilst perpetually spilling out monologues of self-pity. Who ever gets in his way (and some people don’t have a choice, if they want to regain access to their flats or cars), is overwhelmed by a torrent of third-rate philosophy and rather personal criticism regarding their shortfalls in locking themselves out.

Manglehorn is obsessed with emptying his post-box (the meaning of the bee’s nest underneath has eluded me), and we soon learn, that he is obsessed with a certain Clara, who left him some way back. She returns all his letters unread, which he collects in a special room, full of memorabilia to her name. His son Jacob (Messina) is a stockbroker, outwardly just the opposite of his dishevelled father, but equally dishonest with himself. When he gets into trouble with the law, his father tries his best to humiliate him even more. The same goes for Dawn (Hunter) a bank-cashier, who is naïve enough to believe that Manglehorn might have some feelings for her, instead she too is put in her place,by his long winded stories of the happy times he had with the blessed Clara. The only creatures Manglehorn has any positive feeling for are his grand daughter and his cat – since they do not talk back. Unsurprisingly, we finally learn, that Clara left Manglehorn because he was always emotionally distant.

Al Pacino hams his way through 97 minutes, of this one dimensional and repetitive drama. He makes the minutes stretch, and if Green tried to reign him in, he was totally unsuccessful. Pacino’s Manglehorn, centre-stage for the whole film, leaves very little space for the development of any other characters, who are simply reduced to card-board cut-outs. Worst of all, there is even hope on the horizon – a soppy ending in line with the countless other failings of Green. The camera shows a candy-coloured America, as undeserving of saving as AJ Manglehorn – a self-obsessed bore and misanthrope, whose obnoxiousness is mistakenly shown as riveting. AS