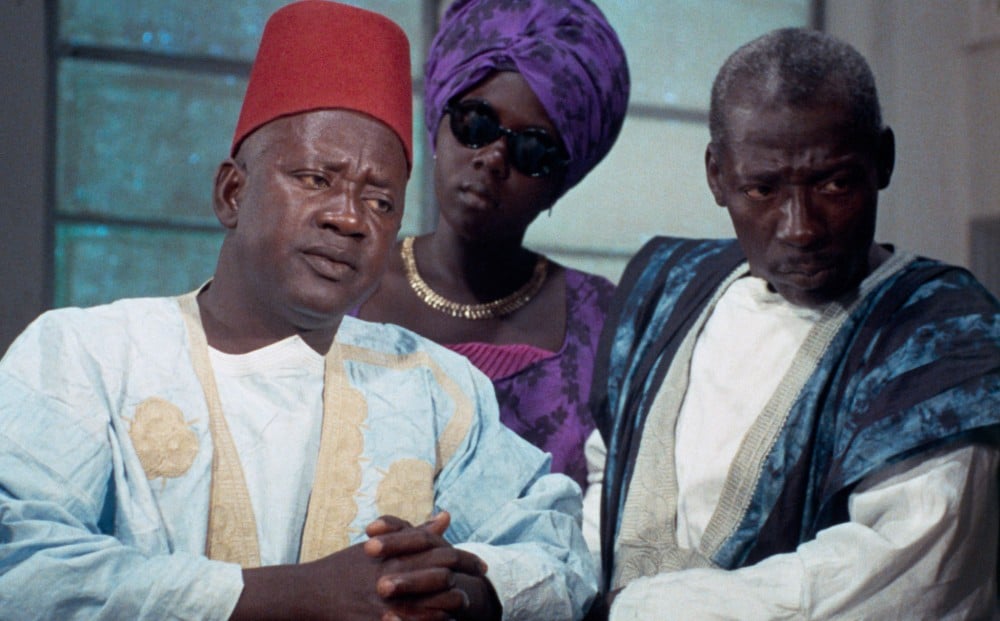 Directed, written and produced by the legendary, ‘father of African film’ Ousmane Sembène, Mandabi was originally made in 1968 and won the Special Jury Prize at Venice Film Festival.

There’s an elegant simplicity to Sembène‘s cinema that makes it a joy to watch. This second feature was the first ever made in the Wolof language—and glows with its involving narrative, convincing overblown characters and spectacular sense of place.

Adapting his own novella – Sembène crafts a scathing satire of society in his native Senegal, scarred by corruption, greed, and poverty in a post-colonial disarray with its own hierarchical system led by head honcho, Ibahima Dieng, an obnoxious self-entitled bully (Gueye) who is pictured enjoying the attentions of a local street barber in the opening scenes.

Presiding over his large family and two wives who pander to his every need, Ibrahima is a penniless proligate who lives on a mountain of debt. And when a nephew in Paris sends a generous money order back home to Dakar, for a time is looks like Ibrahima’s lucky break, but it isn’t. And French colonialism is to blame for what happens next – as a Kafkaesque nightmare unfolds.

While we hate him for his pompousness, Ibrahima also has our sympathy. The trials and tribulations he experiences are only too familiar red-tape wise. Absurdist humour takes the edge off the harsh realities of life in this beautiful but impoverished corner of Africa, Paul Soulignac’camerawork adding to the allure of this neorealist gem. MT

MANDABI is in cinemas June 11, available on Blu-ray, DVD and Digital from June 28