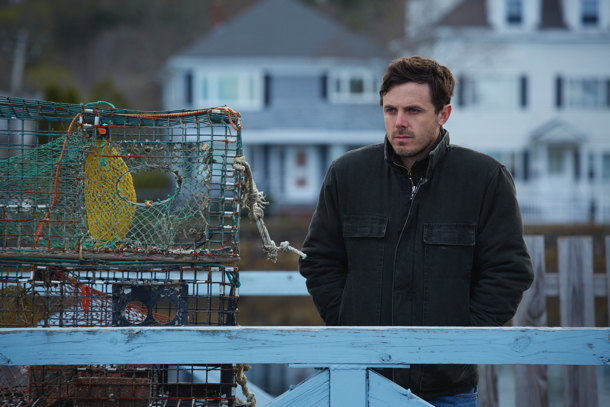 Manchester by the Sea (2016) BBC iPlayer

Director/writer Kenneth Lonergan sprawling, near epic tableau of a man caught in his guilt, is set in the idyllic Massachusetts seaside town of Manchester: the sheer beauty of the environment colliding with the pain and anger of a past, when a man’s whole life disintegrates.

We meet Lee Chandler (Afflick) working as a janitor in Boston: he is efficient, but on a collision course with nearly everyone he meets, clients or fellow drinkers in a bar. The first one he insults, the second he beats up. He lives in a basement studio, a cell, without much light. This place is as neglected as the man himself, and we want to know more about him. A phone call from Manchester-on-Sea has him rushing to the local hospital – but he is too late, his brother Joe (Chandler) has died of a heart attack. In his will he has stipulated that Lee will be the guardian for his 16 year-old son Patrick (Hedges). We watch flashbacks from a decade ago when the three are happily fishing on Joe’s boat. Slowly more emerges about Lee and his problems in Manchester. Patrick does not want to leave town: he is a member of the school’s ice-hockey team, and successfully two-times his girl-friend. In denial of his father’s death, not uncommon in his age group. His mother Elise (Moll) was alcohol dependent and left the family, the re-union between mother and son is strained. Lee continues where he left off in Boston: bar fights and arguments. When he meets his former wife Randi (Williams) the grim truth eventually comes out about the loss of his three children.

Any parent losing a child will never really recover, but to lose three children and live with the guilt of your own negligence is impossible. After the accident, interviewed by the police, Lee tried to kill himself, snatching a revolver from an officer – only for it to jam. It would have been more human on Lee if he could have succeeded, because he really is empty inside, reliving his nightmare daily. His aggression is just a bait: he wants to be punished, at least physically. He might just be functioning in Boston, but Manchester is a step too far. Lonergan shows that Patrick is just a Lee in the making: he, like many males, is only interested in sex, booze and sport, the latter active or on TV. It is no accident that Patrick and Lee communicate best, when they play with a tennis ball. Most women and men live a near segregated life in the small community: divided very much on emotional lines, which determine their activities. There is a seemingly total absent of culture in Manchester, the provinces are left to rot intellectually. All this is chronicled without any resort to sentimentality.

Despite some flaws, DoP Jody Lee Lipes (Marta, Marcy, May, Marlene) catches the outside beauty with stunning panoramic shots in primary colours, in contrast to the dim interior landscape . Affleck is good, but not great, the ensemble cast helps underline the emotional helplessness between the genders. At well over two hours running time, Lonergan keeps this intense drama absorbing, emerging as a sort of East Coast Tennessee Williams.AS