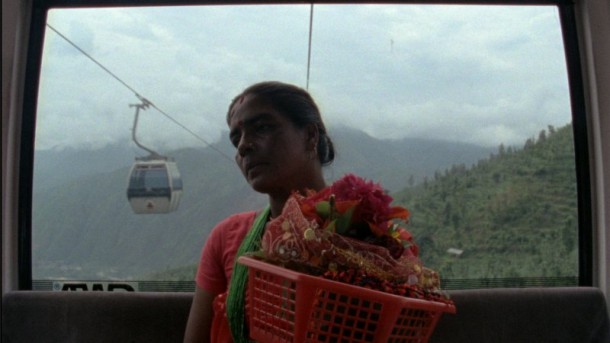 A ride in cable car is always special and produces unique reactions from these delightful Nepalese pilgrims in a cable ride car over the lush verdancy of Trisuli valley, on their way to visit the temple of the goddess Manakamana, high up in the mountains to the west of Kathmandu. Stephanie Spray has lived in Nepal since the 90s and, with Pacho Velez, she has filmed the ten minute journey up and down the mountain.

Their static camera concentrates on the travellers, recording their experience of the trip with startling individuality and never leaves the cable car station once it reaches the summit or at the bottom. These little miniature otherworldly vignettes, like documentary poems, are accompanied by a sixties score from Pink Floyd, yet recall John Donne and other metaphysical poets.

The first visitors are an elderly man and a young boy who are completely silent during the whole journey, it’s as if the directors wanted to show us the hardest part first. All the other travellers are much more vocal than the first duo and one instinctively felt sympathy for the goats – very noisy – fearing that they might end up being sacrificed. The loudest ensemble were three male members of an Asian heavy metal band, who travelled with a cute little cat: they were the closest to anything from the modern World in this spiritual place. There was harmless fun; slapstick even, provided by two elderly women who ate their melting ice-cream amidst continuous giggles. Two sarangi players talked about the difficulties of travelling up the mountain before the cable car was built. Then they tuned their instruments and played. Three elderly women talked nostalgically about their lives, they had seen hard times when they were young but the past was still very vivid for them. Two American-sounding women were silent for half the ride, than suddenly talked like old friends. Someone remarked “Nature is a flower pot from the cable car”, and this seemed a statement that all the travellers – apart from the young musicians – could agree on.

MANAKAMANA makes you curious yet holds a remarkable tension; what to expect next: everybody on board brings new surprises. It is like looking at a Rorschach test, but with beautiful photos of the landscape instead of shapes: we try to guess their backgrounds, even history. In the peaceful spaces, our mind wanders and muses, putting together whole life stories from just ten minutes with the passengers. MANAKAMANA doesn’t paint an idyllic picture apart from the exotic vibrancy of their clothes colours, most of these pilgrims have had hard lives but they also possess a certain dignity. Their bearing shows pride but at the same time humility. An inner life transcends and most of them are untouched by any consumerism. What emerges is how this documentary touches us with so little to work with and how each of us will bring our own associations into play. With MANAKAMANA you can ride the cable car too. AS