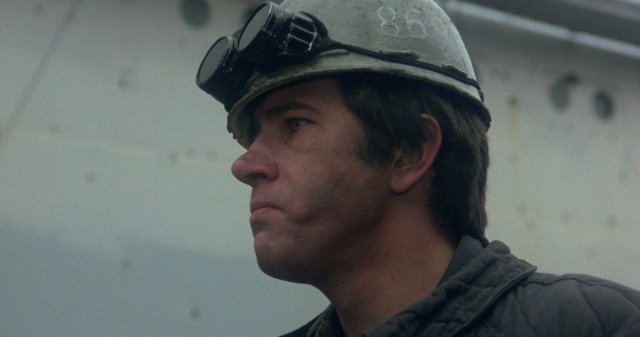 Andrzej Wajda, who died last October aged 90, saw himself as the chronicler of Polish post-war history. MAN OF IRON is a direct sequel to Man of Marble (1977), which landed the director in hot water with the Stalinist censors, and not for the first or last time. Whilst MAN OF IRON would win the Palme d’Or in Cannes on the year of its release, Wajda had to shoot his next film, Danton, in France – before returning to Poland, for another round of fighting with the censors.

Set at the beginning of the Eighties, the journalist Winkel (Opania) is a borderline alcoholic, who works for State TV and Radio and is fed up with everything, including himself. He is sent by his boss to Gdansk to cover the Solidarnosc uprising where the strikers are seemingly winning, he has a clear directive: to find as much dirt as possible to smear the leader Maciej Tomcyk (Radziwiilowicz) – not only in the eyes of the public, but also those of his fellow strikers. But Winkel seems to wake up from a long intellectual and moral coma, and perversely joins Tomcyk and his cause. With the help of Agnieszka (Janda), who featured in Man of Marble, he discovers, that Tomcyk is the son of Mateusz Birkut (played also by Radziwilowic), an emblematic worker of regime, whose history Agnieszka researched in Man of Marble. It emerges that Birkut was killed in one of the earlier fights between Solidarnosc and the police during the Sixties. If you were puzzled by the ending of Man of Marble, this information is proof of the censorship which insisted on that Wajda remove a central part of his narrative. But what we also learn in MAN OF IRON is that Tomcyk is Birkut’s son, and is wrestling with a guilt complex, regarding the death of his father. Whilst Birkut and his fellow workers did not support the students in their strike against the system in the late Sixties, the students reciprocated leaving the workers alone in the early Seventies, when Birkut was killed. Winkel and Agnieszka (under surveillance by the secret police), both seem to find new identity in the renewed struggle.

It is quite clear that Wajda does not see MAN OF IRON as a work of fiction: whilst the colours are bleached out in the fictional parts, the black and white newsreel and documentary clips are much more vibrant. Furthermore, we see Lech Walesa, not only in the newsreel images, but he also acting in the film during Tomcyk’s wedding. It is fiction that informs the events, not the other way round.

With Wajda, the personal and the political are always deeply intertwined. Winkel and Agnieszka are the Alter Egos of the director, searching for the truth, sometimes defeated, but always ready to rise again. DoP Edward Klosinski (Man of Marble), again keeps the images of this Wajda epic memorable. Erasing the borders between fiction and documentary, the director creates an immediacy, which pulls the audience right into the cauldron of the confrontations. AS

SCREENING DURING KINOTEKA IN TRIBUTE TO ANDRZEJ WAJDA