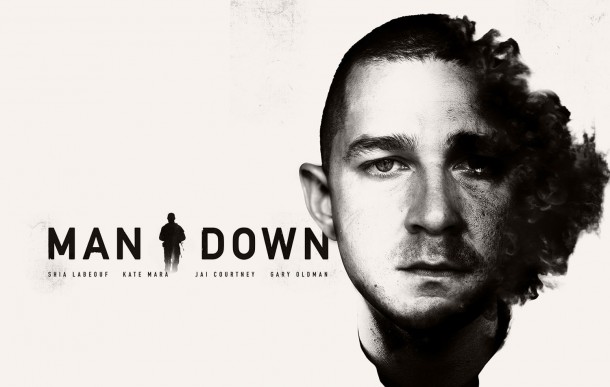 There have been many films about post traumatic stress disorder, but the plight of American veterans returning from far-away battlefields since the days of the Vietnam War in the early ’60s has been more or less neglected by successive governments. On the big screen, the efforts have also been mixed to say the least, and Dito Montiel (A Guide to Recognizing your Saints) has tried to come up with an original approach, which proved in the end – again – not wholly satisfying.

The four-stranded narrative is centred around two GIs returning from a tour of Afghanistan: Gabriel Drummer (LaBeouf) and Devin Roberts (Courtnay), and flips between the pre-war memories of Gabriel, featuring his wife Natalie (Mara) and his son Jonathan (Shotwell); the traumatic war experience; a lengthy interview with councillor Peyton (Oldman), who tries to help the suicidal Gabriel; and finally, the return of the two buddies to a (seemingly) apocalyptic America, where Gabriel tries to find his wife and son.

There is certainly a soft streak in the original Gabriel before “the fall”: Learning that his cute was bullied by his school peers, after they overhead him saying to his mother “I love you”, Gabriel arranges a secret code with Jonathan: They will say “Man down” instead of “I love you”. Devin is much more uncompromising, he basically drags Gabriel into joining the Marines; the scenes in the Lejeune base camp of are conventional, featuring the nominal OTT drill sergeant. But nothing prepares the soldiers for the real war in Afghanistan, where combatants and families often live under one roof and leads to a gruesome incident, from which Gabriel does not recover, in spite of a lengthy session with Peyton. When the two return to their hometown, they find a country devastated by war.

Only in the final part do we learn about the true nature of the denouement, even though, in hindsight, the clues have been there all along. In attempting to tell the story in four different strands, Montiel often loses coherence. DoP Shelly Johnson’s visuals (Wild Card, Hidalgo), particularly of a ravaged America, go a long way, to keeping our interest going, but plot-wise MAN DOWN is often opaque, particularly with regard to the true nature of the relationship between Natalie and Devin during the weeks before Devin joined Gabriel in Afghanistan, due to a broken arm. LaBeouf is tries his best to impress, but is really the weak link – not given helped by the script enigmatic script. MAN DOWN simply lacks the direction to do the topic justice: trying to be avant-garde does not lead to an immersive experience in a story hampered by too many contradictions and unsolved equations. AS