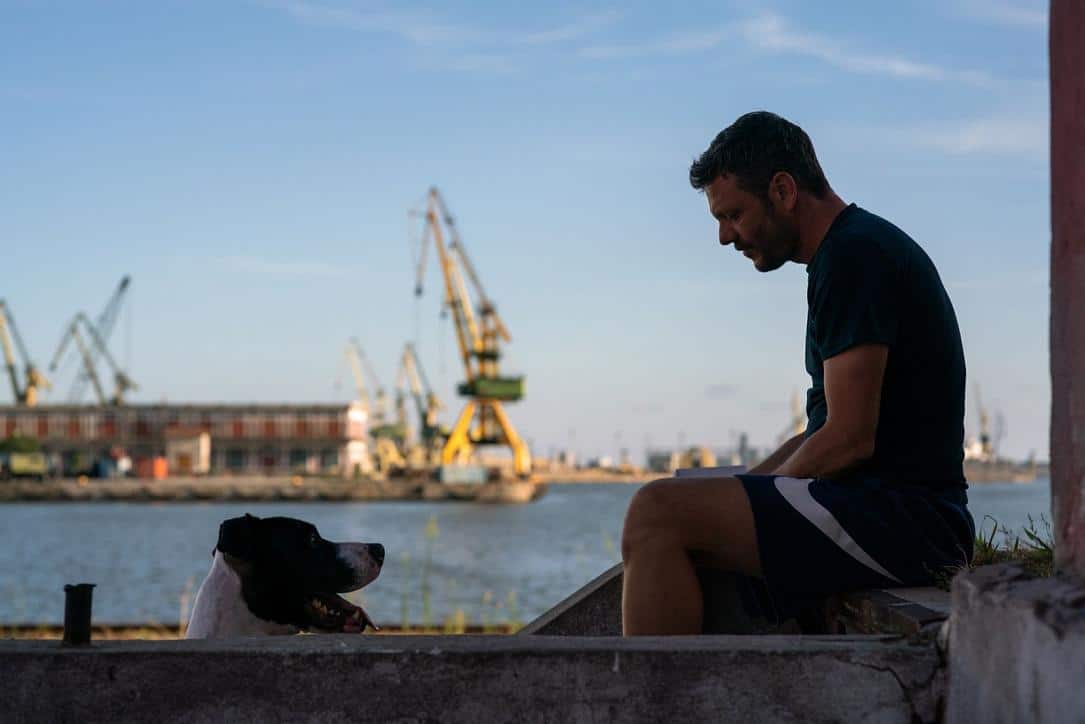 The Covid epidemic changed the world forever and wreaked havoc on lives. People found themselves trapped at home or forced to stay abroad, away from their loved ones. Jealousy and paranoia disrupted relationships. Romania’s Stefan Constantinescu’s subtle yet compelling arthouse drama shows how one man’s obsession nearly destroyed his family in his desperate search for the truth. He also acknowledges the important role pets played in supporting our emotional wellbeing during the pandemic.

After a mysterious text message from an unknown number, Doru (Bogdan Dumitrache) leaves a job in Göteborg for his hometown in Romania. The message suggests his wife Nico (Ofelia Popii) is having an affair and – despite evidence to the contrary – Doru’s imagination goes into overdrive as the tension slowly builds.

In the countryside near the port of Constantia Constantinescu establishes the milieu: a relaxed and summery setting where a close knit community of friends and family – and his eager pet mastiff Amza – welcome Doru back but also wonder how he has breached covid restrictions with the city shortly to go back into lockdown. Romania is shown as a male-dominated society where women rely on their feminine whiles despite being financially self-sufficient. Doru spends the days mentally sifting through a list of likely suspects with the help of his close female friend Georgi. She dismisses a wealthy Turkish widow Dan as a contender:- “he likes young babes” and “can get whoever he wants”. But Doru stops at nothing in his desperation to find a culprit and tracking down the origin of the suspicious text.

Doru and Nico, a therapist who works from home, make a really natural couple. But although their marriage appears to be solid, the film shows how easily doubt can undermine even the closest human bonds. She has made a positive go of her life in his absence and is certainly not the little wife waiting at home. But Doru’s suspicion clouds even his sense of self in the family hierarchy – clearly Nico and their daughter can manage well without him and this further diminishes his male ego, as it slowly implodes. His faithful dog Amza is on the receiving end of his anxiety – and he even tries to abandon the dog in the nearby woods in a scene which strikes an odd note. Man and Dog is not a whodunnit but a taut, well-crafted study of delicate family dynamics in the time of crisis. MT