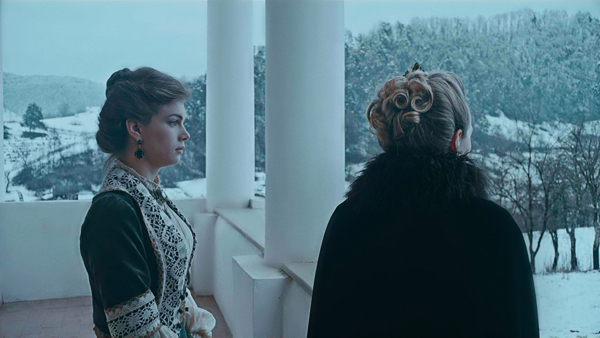 This latest drama from Romanian director and writer Christi Puiu (The Death of Mr Lazarescu) is based on works by the Russian philosopher and poet  Vladimir Solovyov (1853-1900), a close friend of Dostoyevsky whose Brothers Karamazov were inspired by his compatriot. Solovyov’s main focus was to overturn the schism between the Catholic Church and the Russian Orthodoxy, later he worried about Russia losing its spiritual identity.

The Christimas setting for this austere discursive drama is an old Translyvanian manor house belonging to Nikolai (Teglas). Snow is falling and the atmosphere inside is no less chilly as the assembled guests – a politician, a young countess, a Russian General and his wife are involved in an often vituperative and tight-lipped exchange about death and the Antichrist, progress and morality. Each lays out a vision of the world, history, and religion.

The film unfolds in six chapters: Ingrida (Sakalauskaite), the wife of the general expresses her opinion about the true meaning of Christianity, positing that all wars are the work of men who deem conflict a “necessary evil”. She hopes that war will eventually be abolished “by becoming obsolete” – but only Olga (Palii), by far the youngest of the guests, opposes Ingrida, and reads out a letter written by her husband, who has just returned from the war in Turkey, where “Russia is trying to tame a less civilised country”. Her husband reports on massacres committed by the Turks against the Armenians, and the swift revenge taken by his troops. Again, all present agree that such revenge is a true sign of Christianity, but Olga then reminds everyone that the Cossacks, part of the general’s army, are known for their brutality. She believes every human being is intrinsically good, and that this benevolence should be allowed to grow. They all rubbish her views, calling her naive.

Meanwhile, an army of servants slip silently between their masters and are hardly given the time of day. Jansci (Geambasu), the head honcho, directs his underlings like a theatre troupe: they follow his orders with precision, more afraid of him than of their masters. And with good reason: when Jansci finds that one of the waiters has made a mistake, he slaps him, reminding him that any further errors “would make him very angry indeed”. Nikolai’s ailing father is carried from the bath to his room with a Dr. Blumenfeld in attendance, even though it is Christmas Eve.

Olga continues her protests against the mostly male rationale: she accuses Edouard (Broussot), a politician, that he is a materialist. His planned trip to Nice, she says, will only end up in the casino in Monte Carlo. Edouard, a total cynic, agrees smiling. The discussion about pacifism versus self defence sees Olga defending the former, whilst Edouard claims ‘highly civilised’ nations including Russia, have the right to go to war against the more barbaric countries. “Sin, but do not repent” is the motto voiced by the mostly male majority.

The discussion moves on, the focus on Russia’s identity: Is it a Greco/Slavian country, or part of European culture? The uprising in Transvaal against the British is called “Zulu savagery” and Edouard bemoans the lack of involvement by the Dutch in this conflict. Edouard again is in the centre of an attack on Olga, who insists that man has been put on earth for a purpose by God. She also is critical of their hedonistic lifestyle. Edouard is vicious in his reply claiming the real purpose in life is to have a mission: “I had an audience with Czar Alexander II, got a yearly salary of 30 000 Gold Roubles and a diplomatic mission”. He then returns to his argument claiming that the masses submit to evil, and want to kill everybody who are against them. Eduoard also ponders whether God really resurrects us, and if his kingdom is real, is it not just a Kingdom of Death. Finally, falling into the snare of their own discourse and believing that history never repeats itself, none of them is able to realise the extent of the event in which they have unwittingly become ensnared.

Puiu is able to reflect on the three main topics of Solovyov’s philosophy – economic materialism, abstract Tolstoyan moralism and the hubris of Nietzsche’s nihilism – in all these debates. The only humane soul is Olga, who is attacked from all sides. DoP Tudor Panduru shows the splendour of the sumptuous interiors and the meticulous servants who keep their masters fed and watered, without a by your leave. The guests hardly touch their elaborate food, because they are consumed by showing off their verbal eloquence. In spite of its lengthy running time, Malmkrog is always engaging: this is radical entertainment, combining philosophy within the gorgeous surroundings of a dying breed. AS