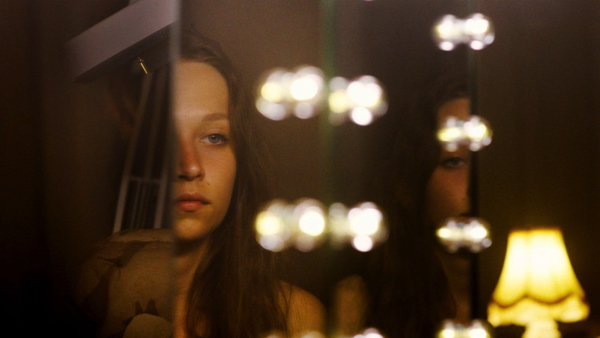 This shady seaside story of sexual discovery is the feature debut of British director Claire Oakley. Slathered in atmosphere it often feels like an extended short. In Cornwall the Autumn mists slowly descend on a run down caravan park, where eighteen-year old Ruth (Windsor) arrives to lighten things up for her boyfriend Tom (Quinn). But her growing doubts about their relationship are echoed in the September dankness setting the tone for a simmering switch in Ruth’s sexuality as she slowly develops feelings for her much older co-worker Jade (Martini), a wigmaker fond of the titular crimson red make-up.

In this visually inventive exploration of drifting sexuality, Oakley dabbles in a heady hotchpotch of genres hovering between horror and poetic realism, DoP Nick Cooke dressing it all up to look like something by Nicolas Roeg. But the underworked script relies on enigma and atmosphere to confer a deeper meaning in banal scenes where Oakley has little to express, apart from the usual coming-of-age conflict, mixed with a heavy-handed gender role reversal.

Newcomer Molly Windsor tries hard to add meaning to the cringe-worthy dialogue, but biting her nails like a little girl in distress seems to defeat  the purportedly empowering theme of Make Up. Without giving away too many spoilers, we soon get where the plot is heading: via a ‘Wicker Man’ like beach scene, with Tom and best friend Kai (Barklem-Briggs) proudly flexing their masculinity and mastery of the Cornish language. A blatantly sentimental first ending which is then trumped by a second one, is a steal from Truffaut’s debut Les Quatre Cents Coups, with Ruth taking the Antoine Doinel part. Make Up is rather a hit-and-miss affair as far as drama goes, but its efforts to engage in the ongoing LGBTQ+ narrative are laudable and worthwhile, and the film’s poster designed by Andrew Bannister is brilliant. AS

IN CINEMAS AND EXCLUSIVELY ON CURZON HOME CINEMA | 31 JULY 2020