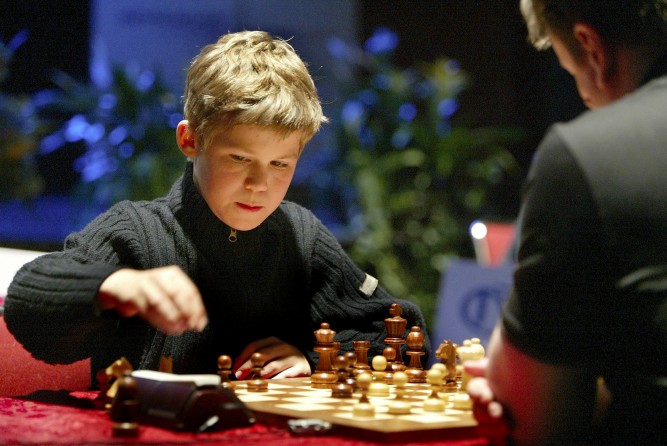 First time documentary feature filmmaker/writer Benjamin Ree offers up a rather subdued and colourless portrait of reigning Chess World Champion, the Norwegian “Wunderkind” Magnus Carlsen, who won his first title when he was only twenty-two, and retained it for over a decade.

Ree’s uses of videos, showing a rather withdrawn character, is the strongest part of this biopic. Magnus’ father Henrik was concerned that Magnus was not developing like other children. But it soon emerged that for Magnus all numbers formed pattern, even pictures; and soon Magnus would beat his father and older children at chess, becoming the youngest Grandmaster at the age of thirteen, Magnus had the world at his feet. His father was told that the only way of further success for Marcus would require a disciplined and rigidly structured learning process. Henrik and the rest of the family did not take this advice on board, and allowed him to be playful, relaying on his intuition.

When Magnus faced the five times World Champion Viswananathan Anand in the latter’s hometown of Chennai in November 2013, the contrast between the two players could have not been greater: not only was the Indian 21 years older than Carlsen, but he relied on his brilliant memory when playing: not only had he memorised all the games Carlsen had played during his career, but nearly all important games in history. The results are interesting, but will mean much more to aficicionadoes of the game.

Ree uses a linear structure which has the effect of robbing his documentary of surprise elements and tension and Magnus himself is rather a bland character, making this rather tedious for those who are not fans of the game. Ree never really enquires about the obviously stunted emotional development of the “Mozart of Chess”, but seems content to stay in a hagiographic mode, which results in a certain stylistic blandness. Those keen on chess or fans of Magnus will no doubt lap this up, despite it’s failings, as Carlsen faces his next challenge : he will face another fresh-faced Russian challenger Sergey Karjakin in New York in November 2016. AS

MAGNUS will be available on digital, VoD, Blu-ray & DVD from 12th December