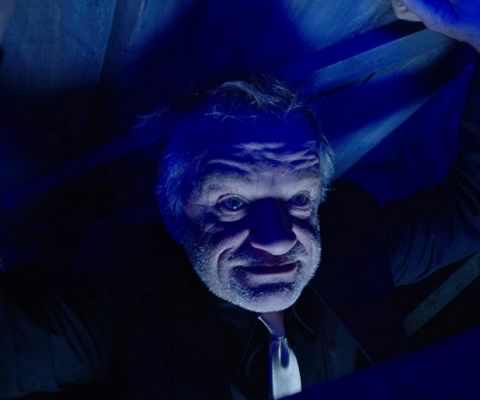 Avant-garde Portuguese auteur Edgar Pera follows his weird and wonderful adaptations of Rio Turvo and O Barao with this mystery drama screening as part of a retrospective of his work here at Rotterdam International Film Festival.

Again he indulges in the creation of a Lynchian universe, where past and future amalgamate in an anarchic dance of loss and angst, all held together by the overwhelmingly monstrous images of DoP Jorge Quintela.

Elderly Raymond (Pinon) lives a nightmarish life without escape: he is either drowning in his dreams, or running helpless and disorientated through a dystopian Lisbon. His main obsession is his daughter Caterina (Baptista) who is getting married to Danio (Pires), one of the henchman of the autocratic regime, which runs on the lines of Orwellian surveillance, the TV anchor giving out the orders for the day. During his nightly sorties Raymond encounters the past and present Portugal, meeting among others General Spinola (Jeronimo), who was one of the Generals in the successful revolution of 1974, before he turned against the socialist government and joined Ex-president Caetano and his fellow generals in exile. Raymond is never quite sure if he is living through the period of post- or past revolution. Raymond falls under the spell of Andre Leviathan (Matograsso), a mixture of religious leader and revolutionary. But Raymond develops a jealous obsession with Caterina and Danio. When the couple have sex, Raymond kills Danio with a knife, only to wake up with a feeling of joy despite realising that Caterina would have never forgiven him.

Whilst the couple are on a barge, Raymond jumps into the water, but is rescued. Fearing the worst, he is amazed not to land up in prison, but back home, which by now resembles a brothel.

Dissolves dominate this spectacular poem of male madness: Raymond is straight out of L’Age d’Or, and Lisbon is a rather drab background, the city’s modern architecture An emblem for the soul destroying world of the Regime. The religious fanaticism of the President echoes Bunuel; Raymond’s hallucinations are the reflection of male impotence. Some music by Manoel de Oliveira embellish this unique feature, directed by a masterful and uncompromising Pera. AS