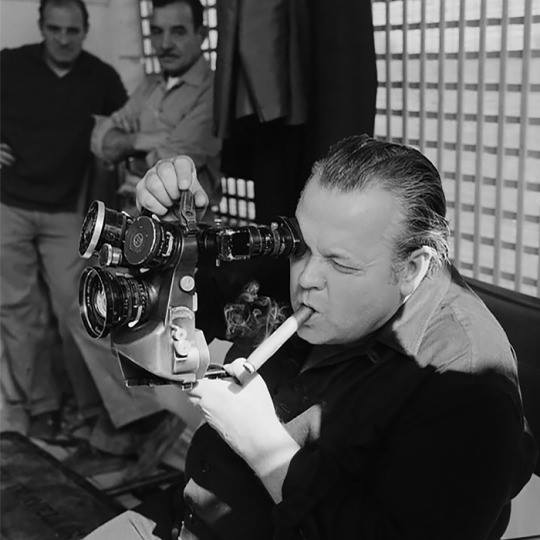 Veteran documentarian Chuck Workman hits the high notes with his lively and engaging look at the life of Orson Welles. With witty one-liners from the maestro himself, rare archive footage and interviews with those he loved and worked with, although it only skims the surface, it shows Welles to be an appealing though unpredictable maverick absorbed in his craft rather than with his family (according to daughter Beatrice) and with a natural gift for bringing theatricality and talent – but not always finance – to the projects he chose.

The Welles story has been told many times before, on the page and on screen, and this although this offers nothing particularly new to the connoisseur, it gives a brisk and vibrant visual sense of Welles’ peripatetic career from the time he appeared in Ireland, as a penniless young man on an “art” trip, bluffing his way straight into the leading role in a Dublin stage (“I started as a star and worked my way downwards”) to his final Merv Griffin interview hours before he died. The documentary is divided into decade-sized chunks from the 1930s onwards charting Welles’ career on stage and as a way of getting to know the star and filmmaker who entertained us so royally with his prodigious output as the trailblazer of American postwar independent film.

Workman also offers glimpses of the sparkling array of Welles’ unfinished films that tempt our imagination – The Deep, Don Quixote, King Lear, The Dreamer et al – abandoned largely due to lack of financing – which meant that Welles worked in stops and starts when he had the money; and is the reason why Othello was delayed and Falstaff: Chimes at Midnight was four years in the making.

In the 1930s after his training at Todd’s School, Illinois, Welles’, he made his New York debut in 1934 as Tybalt and also married and made his radio debut and his first short. Later he was known for his impressive theatre productions at the Federal and Mercury Theater, his radio broadcasting and Workman includes appearances from Norman Lloyd and Richard Linklater who styles him the “Patron Saint of indie film”. Although signed to RKO, he was not a successful Hollywood filmmaker despite triumphing against the odds with Citizen Kane which crashed and burned at the box office but later met with critical acclaim, and The Magnificent Ambersons that fell prey to an editing controversy – Welles’ ending was changed to a ‘happy one’ in the wake of Pearl Harbour while the director was busy in Brazil on a Government project. This unfortunate episode lead to him being shunned by Hollywood for years afterwards and he sought exile in Europe in the late 1940s after the The Stranger – his most financially successful film but his least favourite. A Touch of Evil (1958) was also a commercial failure but lauded in Europe and won a prize in Belgium.

But despite this light touch, MAGICIAN is by no means a hagiographic account of the legendary filmmaker. Workman highlights Welles’ uncanny ability of alienating ‘the money’: there was something about him and his unpredictability that did not engage the backing of financiers, although this is never really explored. Workman also fails to elucidate on the story behind another lost project, The Other Side of the Wind, which took up most of Welles’ time during the 1970s.

The only other criticism of Workman’s handling (Workman-like?)of his documentary – in common with many biopics – is that he doesn’t delve deep enough into the life behind the showman; sticking to the surface razzle-dazzle rather than exposing the soft underbelly – what does come across though, is Welles’ vulnerability, mystique and appeal to women: he married three times: Virginia Nicholson, Rita Hayworth and Paola Mori and sired four children in and out of wedlock, spending his final years with longtime lover Oja Kodar, who also appeared in F for Fake and The Dreamers. And in this way, MAGICIAN will whet your appetite to discover more about this intriguing master of stage and screen, who, inspite of his box office failures, was awarded the American Film Institute’s Lifetime Achievement Award in 1975 and the highest honour of all, the D W Griffith Award in 1984. This year at CANNES there is a Centenary Celebration of his work with 4k restorations of Citizen Kane, The Third Man and The Lady from Shanghai. MT