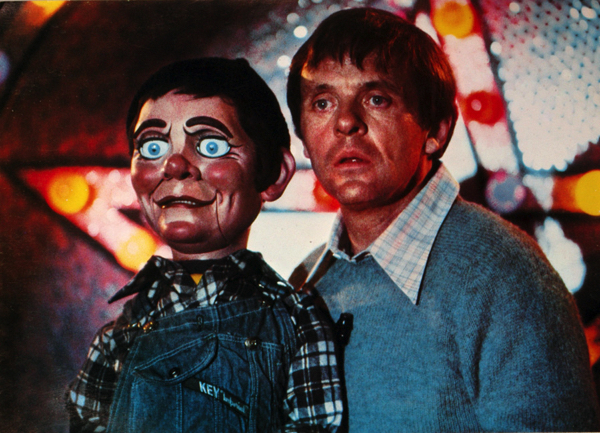 Weird dolls have long been a fascination for horror fans. From Hugo to Annabel and the many incarnations of Chucky, meet one of the original devilish dummies: Fats…the side-kick from hell.

He belongs to Charles ‘Corky’ Withers (Hopkins) a shy magician who just cannot get his act together, quite literally, until he introduces a foul-mouthed ventriloquist doll to his shtick, and his star begins to rise. His powerful agent Ben Greene (Meredith) asks Corky to appear on TV, after his double act’s great success. But Corky runs away into the Catskill mountains, claiming he is afraid of success. There he meets his high-school love Peggy (Anne-Margret), who is in a sterile marriage with Duke (Lauter), also known to Corky. Corky tricks Peggy into believing he is love in love with her and they sleep together. Fats becomes jealous of Peggy, but first he has to ‘deal’ with Greene and Duke, who meet a sticky end. After Corky puts a knife to himself so as to stop him and Fats from doing any more harm, the latter, also feeling very faint, already has his eyes on another ‘person carrier’.

Adapted for the big screen by William Goldman from his best-selling book Magic is directed by Richard Attenborough who crafts a creepy study in schizophrenia, following in the footsteps of Hitchcock’s Psycho and later The Dummy and Caesar and Me in the ‘Twilight’ series. All of these share a popular misunderstanding about schizophrenia, assuming that there is clear cut split into two defined personalities. In reality, schizophrenia fragments the personality into small sub egos, allowing sometimes a sort of domineering second identity, which allows the old self to accomplish (often violent) acts of omnipotence.

Goldman mixes elements of the “Incubus” mythos into his script, muddling the waters slightly. The cast, particularly Hopkins and Ann-Margret are convincing, Hopkins deftly morphing between Corky’s various personalities. Dog Day Afternoon veteran Victor J. Kemper’s (Dog Day Afternoon) is behind the camera, although the production now feels dated visually. Magic is a bloody tour-de-force, and there is a certain gleeful voyeurism at work, without reaching the eeriness of Powells’ ‘Peeping Tom’. AS