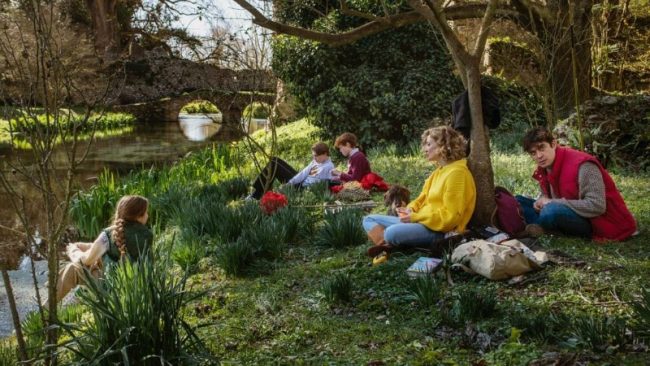 Kids are the victims of Ginevra Eklann’s sentimental saga of divorce and disarray. Opening this year’s LOCARNO FILM FESTIVAL, this breezy upbeat drama sees three siblings  desperately hoping their parents will get back together again – ‘if only’.

The family’s tensions finally come to a head during Christmas when their disorganised dad Carlo (Scamarcio) whisks them off for holidays that will end in sadness and sexual awakening. But before they go Alma (Oro De Commarque), Jean (Giustiniani) and Sebastiano (Roussel) arrive in Rome with their Russian Orthodox mother Charlotte and her new boyfriend. Carlo is one of those dads who is great fun but not one for detail. He is more interested in his latest script and in his co-writer Benedetta (Alba Rohrwacher) than taking care of his children. And while they’re on holiday – at the seaside rather than the usual family trip to the mountains – his only preoccupation is work.

The story is seen from the kids’ point of view. How they cope with being part of a broken marriage. And they soon catch on to the holiday romance under their noses. Seba is keenly aware of the sexual vibe going on between Carlo and Benedetta, but he’s also burdened with being the eldest, while the other two feel homesick for their mother but find their father fun and exciting – it’s a well known dynamic.

Carlo and Benedetta seem well-matched. She is flirty and fun, but a bad influence on the kids with her pot-smoking and stealing from the local market. Seba clearly fancies her but also disapproves – a heady mix that will see them having a bit of a sub-fling on a cheeky Sunday trip to church – while Carlo is busy writing. It’s a shame Eklann relies on the cliched dramatic trick of having Carlo’s dog disappear in a gimmick that we know will end in tragedy. Why do so many indie filmmakers do this?

Scamarcio and Rohrwacher are effortlessly the stars of this well-crafted family affair which is both light-hearted, sentimental and firmly tethered to reality. MT