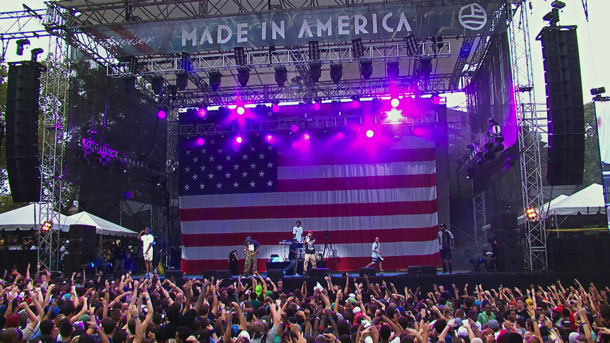 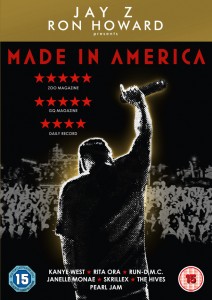 Ron Howard is the director behind Frost/Nixon and A Beautiful Mind. That his next project should involve (and be financed by) the hip-hop artist Jay-Z may at first seem strange but actually the two get on like a house on fire in Made In America, a documentary that looks at how Jay-Z set up a two-day concert in Philadelphia (2012).

Growing up on the wrong side of the tracks in Brooklyn, NY, we learn how Jay-Z used his musical talent as a way not only to carve out a future for himself but also to help others and ended up married to superstar Beyoncé Knowles. Howard illustrates, by way of participant interviews and some really entertaining and inspiring musical vignettes with the artists, how the concert has injected a upbeat vibe into the local community, re-energising the work ethic in a positive way.  However, not everyone approves of his efforts: local resident Lillian Howard voices her strong disapproval of the ‘bang-bang’ music which, she claims brings an undesirable element into her neighbourhood; illustrating that you can’t please all of the people, all of the time!

We hear about Jay-Z’ political visions for the future of his multi-racial America with its black president who has, in his opinion been a cohesive force in bringing the country together. But, like so many hugely-talented creatives, Jay-Z remains a cypher; locked behind his facade of fame, unreachable despite Howard’s efforts to get beneath his skin  MT