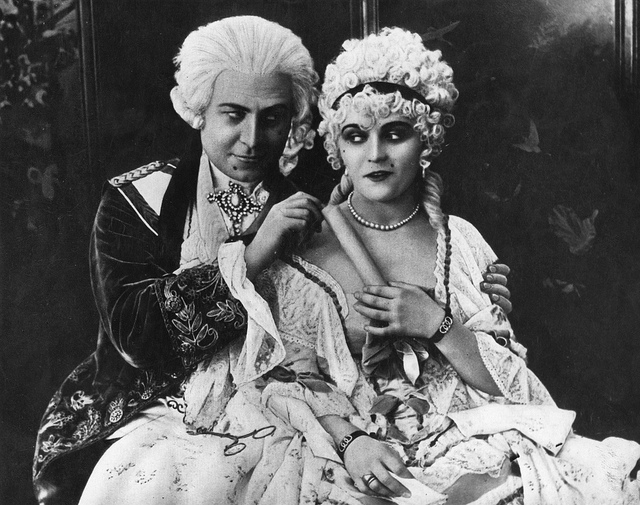 Madame Dubarry was the favourite mistress of King Louis XV, so it would seem fitting that Ernst Lubitsch’s drama of her amorous adventures MADAME DuBARRY should premiere on the 18th September 1919 to celebrate the opening of  the “UFA Palast am Zoo” in Berlin: the Marquise cinema of the film production corporation of the same name, which had been founded during the war years and would dominate German cinema until 1945. The cinema was, symbolically, destroyed in the same year.

To this day, it is still surrounded in controversy – Kracauer lambasted it in “From Caligari to Hitler” as a soap-opera, stating “it reduces the [French] revolution to a derivative of private passions”. Other critics saw MADAME DuBARRY simply as a German version of the Italian cinema of the period, whilst another interpretation saw “a reckoning with every form of power”. It was indeed ironic that at the same time the French revolution was being depicted in the local cinema, Berlin (and other German cities) were experiencing riots between rival political organisations, as well as hunger marches. Right-wing critics saw parallels in the drama to the demise of the German monarchy of the House of “Hohenzollern”. Lubitsch himself wrote thirty years later: “At the time, I tried to make my films less like operas, and attempted to humanise the historical protagonists. I showed that their intimate details were equal in importance to the role of the mass movements, and tried to make them co-exist.”

Lubitsch set great store in the importance of intimate details of his drama, the main characters are shown with all their foibles – but the masses are depicted as characters straight out of Le Bon’s “Mass-Psychology”: they are either totally passive or terrorise the aristocrats – said intimate details are just left to the latter. Not that Lubitsch shows any sympathy with them: Jannings Louis XV is shown a fool, unable to lead a nation, just interested in young women, making a fool of himself in the process. Even his death of smallpox, is not dramatic, just another macabre accident. Pola Negri plays Jeanne/Dubarry as a naïve coquette, just interested in making her way to the top – saving her love only for her cousin Armand (Liedtke). Dubarry’s end, unlike the one of Louis XV. – is particularly gruesome: she is guillotined, her head thrown into the jubilant masses, who fight for it like souvenir hunters at a football match.

Lubitsch would follow MADAME DuBARRY with equally monumental productions like Anna Boleyn (1920), Sumurun (1920) and The Loves of Pharaoh (1922), all sold with profit to the USA – before he himself would follow to Hollywood by the end of 1922. His confidence in the Weimar Republic seems to have been minimal, a point he stated often enough. Pola Negri beat him by a few month – The Flame (1922) was the last of their three UFA films. AS

This is the first ever blu-ray release of Lubitsch’s epic history, and will be accompanied by Lubitsch’s earliest surviving film, Als Ich Tot War. MADAME DuBARRY will feature as part of Eureka’s award-winning The Masters of Cinema Series and will be released on 22 September 2014.

Before Ernst Lubitsch created his eminently sophisticated Hollywood sex comedies, he was at work in Germany perfecting his earliest entries into the genre, alongside sweeping ironic dramas based on historical events and often set in exotic locales. One of his earliest successes merged elements of both modes: Madame DuBarry.

A recounting-à-la-Lubitsch of the torrid affair between the title character (Pola Negri) and France’s King Louis XV (Emil Jannings, who would go on to portray Henry VIII in Lubitsch’s Anna Boleyn of the following year – a film that neatly bookends Madame DuBarry), the picture spans scandalous intrigue at the court and the ring of the guillotine among the riotous mobs of the Revolution.

Also included in this edition is Lubitsch’s earliest surviving film, the 1916 Als ich tot war [When I Was Dead], which stars the director himself in a lead role that involves his faked suicide and (prefiguring the later Die Puppe.) an infiltration of the domestic space whilst in disguise (not as an automaton, but as a servant). The Masters of Cinema Series is proud to present Madame DuBarry and Als ich tot war in a special Dual Format (Blu-ray + DVD) edition for the first time.