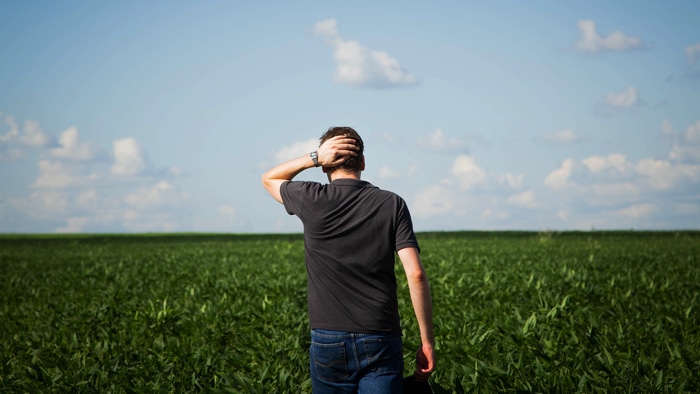 More transexuals are killed in Brazil than anywhere else in the world and this sobering thought provides the touchstone to Madiano Marcheti’s assured feature debut that premiered exactly a year ago at Rotterdam’s film festival’s 50th celebration.

Madalena is a murder mystery that is never solved. We see a broken body lying in a field of lushly swaying soya, but we never discover much more – this is not a crime procedural or a whodunnit. What Madalena does provide is a haunting and unsettling snapshot of the cultural and societal references that support intolerance in this deeply religious, patriarchal and macho part of rural Brazil that remains connected and influenced by the modern world and yet at the same time, tethered in the past. In this sense the setting (where the director himself grew up) is very much a character that influences what has gone before. In this eerie tropical landscape, ostriches strut like creatures out of a Sci-fi thriller and drones trawl the skies patrolling the vast acres of farmland. Meanwhile monsters are being bred in the frivolous disco-dancing, vape-smoking, body-conscious urban hinterland, and they’re called men.

Capturing the vast open skyscapes and deathly silences of the spooky agrarian setting Marcheti stealthily explores the aftermath to Madalena’s death through three protagonists who are unknown to each other as they gradually become aware of her disappearance. The details are left unclear and we never find out how the death eventually leaks out into the news.

Club hostess Luziane calls round at Madalena’s simple village home several times, her mother pressurising her to borrow money, but Madalena is nowhere to be found. The narrative then shifts to body-builder Cristiano who works for his land-owning father, spending his time smoking drinking and injecting himself with hormones. He can’t forget what he’s seen in the soyafields, so he takes his friend Gildo back to where he originally saw the body but it’s a hostile and inhospitable terrain that keeps its secret well hidden.

In a mellow and soft-centred finale it’s left to trans woman Bianca and her girlfriends to pack up Madalena’s possessions as they share memories of happier times with their friend. Marcheti never passes judgement on his characters, they are merely there to serve the narrative – but none is particularly likeable, leaving us to reach our own conclusions on this sinister story and the hostile and unknowable place where it all unfolds. MT

NOW ON MUBI I TIGER COMPETITION