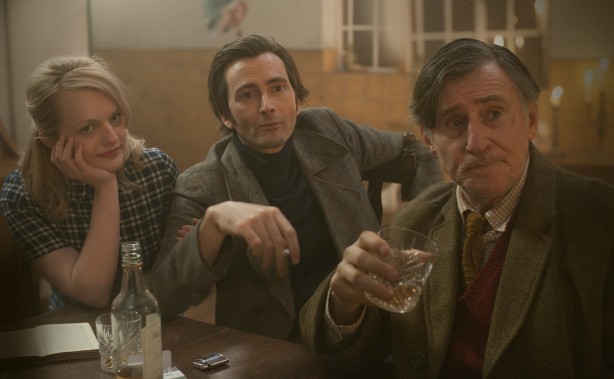 You may not learn a great deal about Sixties psychiatry in Robert Mullan’s impressive biopic of the maverick Scots mind doctor RD Laing, but after Dr Who David Tennant plays him with a stunning magnetic charisma that captures our imagination and goes along way towards helping us understand why he was successful in treating patients who had often been failed by the conventional medicine of the day.

Dubbed ‘the acid Marxist’, RD Laing is certainly an elusive and highly complex character to pin down. Like many dedicated to their cause, he is portrayed as often failing his nearest and dearest in his attempts to be all things to all people, and in particular his patients. But while being intense and empathetic and vulnerable, he comes across as an arrogant narcissist in respect to his avant-garde professional methods.

Robert Mullan has hired himself a splendid cast – Michael Gambon and Gabriel Byrne are impressively convincing as patients afflicted by mental illness, and the narrative in seen through Laing’s relationship with Angie Wood (Elizabeth Moss to appeal to US audiences) – a psychology graduate who comes to meet him for lunch one day, and ends up staying and having his baby, losing her own way and self-respect in the process. Clearly Laing was not a complete cad, acquiescing to all her demands in the East London alternative centre Kingsley Hall; where they live with his medication-free patients in a care in the micro-community-style environment, but he is not prepared to set up home with her when she insists on having a child, despite the threatening behaviour of those in his care who want his continued and undivided attention. Their relationship is often tested, when he own family of four children make themselves known, but Laing always makes it clear what he is about, in a charm offence. The film suffers from some tonal unevenness in the scenes changes: it’s not sure whether it wants to be a straight-up biopic or a dreamy dark comedy, shot in a smoky pot-fuelled haze of pastel peach hues.

MAD TO BE NORMAL makes much of its Sixties sensibilities, the score includes The Kinks “You Really Got Me” and Donovan’s Season of the Witch” and Laing struts his stuff in Beatle boots, besuited in bottle green velvet and Sargent Pepper style patterned tunics. This is a captivating film largely because of Tennant and his memorable portrayal of a man who, like many psychiatrists, might just have been slightly deranged himself in order to enter the minds of his patients. As the saying goes: You don’t have to be made to live here, but it helps”. MT

OUT ON GENERAL RELEASE FROM 6 APRIL 2017