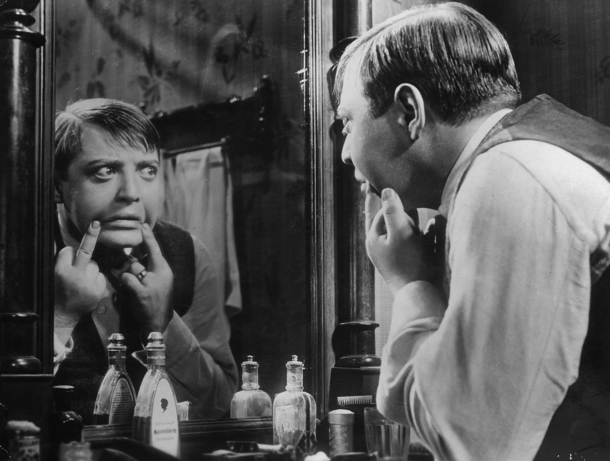 Even though M is Lang’s first film with sound, there are still silent scenes, like those in the streets or the courtyards. But after the great epics Nibelungen or Spinnen, this time the focus is on an individual: Peter Lorre, in his debut, as the serial killer Hans Beckert. M starts with a parable: seven children in a circle, a girl speaking a macabre counting rhyme: “Wait, wait for a while, then Haarmann will come to you too, and with his little chopper, he will make mincemeat out of you, one, two three and out are you”. The reference is to Fritz Haarmann, the serial-killer of Hannover, who murdered 27 boys, and was executed in 1925.

In M, the odd one out is seven-year-old Elsie Beckmann, another victim of the Berlin killer whose victims are all little children. The Police and the criminals of the underworld in Berlin all unite in the hunt for Beckert. Obviously, the Police are doing their duty, but their constant raids are disrupting the activities of “ordinary” criminals like burglars and safe breakers, so ironically the gangsters join in the search. Led by the most successful criminals, these organized gangs get to Beckert first. They set up a kangaroo court, where the chief safe breaker (Gründgens) is acting as the prosecutor. In his long leather coat, he looks (and talks) like a member of the future SS: declaring that Beckert is unworthy to live, a vermin, to be exterminated. The police ‘intervene’ just in time. Interestingly, Gustav Gründgens became a good friend of the Nazis after 1933, and Göring made him artistic director of all Berlin theatres. He was interned after the war and Klaus Mann’s roman-a-clef, featuring Gründgens interactions with the Mann family, was filmed as Mephisto by Istvan Szabo.

There were some imminent German actors at the time, but Lorre, who was acting on stage in the Brecht play “Man is Man” in the evening, whilst filming M during the day, managed to carry the film with his magnetic persona. His high-pitched voice, and strangely ungainly figure, he is an outcast from the beginning. His portrait of a driven soul is perfect: “Sometimes it seems, that I am running after myself… I want to run away…run away from myself…then I stand in front of a wanted poster, reading what I have done, I am reading, reading…did I really do that?” In spite of his many Hollywood roles, Lorre would never be so convincing again, apart perhaps from The Lost One (1951), a film noir, where he plays a doctor in a displacement camp, his only work as a director, shot on his return to West Germany in 1951. The lack of success broke him and he ran back to Hollywood.

Fritz Arno Wagner’s camera work creates the perfect climate for a mass psychosis: everyone is suspecting their neighbours, friends and family members, and this gives rises to continuous denunciations as well as public and private fracases. It is the portrait of a people who trust neither themselves nor their countrymen: somehow the time is rife for a cataclysm. And it took less than two years to arrive. AS

A BFI Film Classics book, M, by Anton Kaes, first published in 2000, is out now through Palgrave Macmillan.