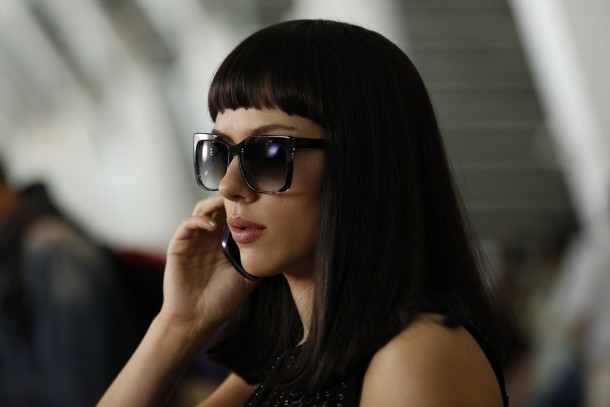 One of the pivotal figures of the ‘Cinema du Look’ movement, giving his films a highly visual style, LUC BESSON is also fascinated by the human brain; so much so that he has funded research on the subject and made it the focus of his latest fantasy sci-fi LUCY.

It stars Scarlett Johansson as a woman who gains access to 100 percent of her brain’s potential (instead of the average mythical 10 percent) after being forced by to ingest a massive quantity of the naturally occurring human hormone CPH4 (produced by women during pregnancy). Don’t worry: LUCY doesn’t require any deep probing of your grey matter. Just sit back and enjoy a roller coaster ride and Johnsson’s dynamite performance as a velvet-voiced virago cutting a no-nonsense swathe through the all-male cast of baddies. As a plus point, her intellectual superiority has the vicarious effect of making women everywhere feel they too, for once, could rule the World.

Lucy’s story is quite simple: while trying to fit an early night and some studying in around her dodgy new boyfriend (a smarmy Julian Rhind-Tutt), she ends up as an unwilling drug-mule for gang-leader Jang (Choi Min-sik) when a bag of blue crystals (CPH4) is implanted in her stomach wall, after an impromptu ‘kidnap’. After a dust-up with Jang’s nasty security guards, CSI-style CGI footage kicks in to reveal the drugs entering her system, activating her brain cells to Einstein levels and beyond.

As luck would have it, Morgan Freeman happens to be lecturing over in Paris on the very subject of ‘brain access’. As visiting professor, Samuel Norman, Besson taps into his knowledge, illustrating the endless possibilities of Lucy’s enhanced human status and how ‘homo sapiens’ is linked to the Animal Kingdom – all illustrated in a glorious technicolor-style nature sequence.  Lucy’s transformation from frightened student to powerful superwoman is impressive. She painlessly removes a bullet from her shoulder while scoffing a pile of sandwiches and struts into a local hospital, demanding that the bag be removed from her body, while telephoning her mother to describe the minutiae of events and emotions leading back to her birth. The effects of the drugs are increasingly transformative as Lucy’s physical movements and facial expressions reflect her bionic physicality and intellectual superiority. This is Johansson at the top of her game developing her skills not just a human actor but as a seriously impressive being without the assistance of make-up or special effects.

Even if your lip curls at the thought of sci-fi or CGI-enhanced visuals, Besson’s LUCY is a fun-filled joy ride with some worthwhile elements although it all gets rather silly in the end. Despite becoming less emotional and more analytical after absorbing the drug, Besson avoids transforming his heroine into the distant, psychopathic alien from Under The Skin: this is an upbeat and strangely empowering piece of filmmaking; and will have particular appeal for female audiences.  Using her new-found powers, Lucy sets out to assist the police in rounding up batches of the drug, involving an enthralling car chase where she skilfully drives against oncoming traffic with a French detective Del Rio (Amr Waked) who asks her, desperately, if she normally adopts this strategy on the road : “I’ve never driven before”, is her candid response. So despite a rather over-excited denouement where Lucy’s capabilities involve time travel, as she wizzes ‘God-like’ backs through the centuries, waving the Taiwanese drug fiends away and locking them behind imaginary glass barriers. There’s an altruistic outcome for her drug-fuelled frenzy: eventually she finds a way of downloading her extensive knowledge and passing is on to future generations.  The future’s bright – the future’s LUCY. MT

LUCY IS OUT ON GENERAL RELEASE FROM 22 AUGUST 2014