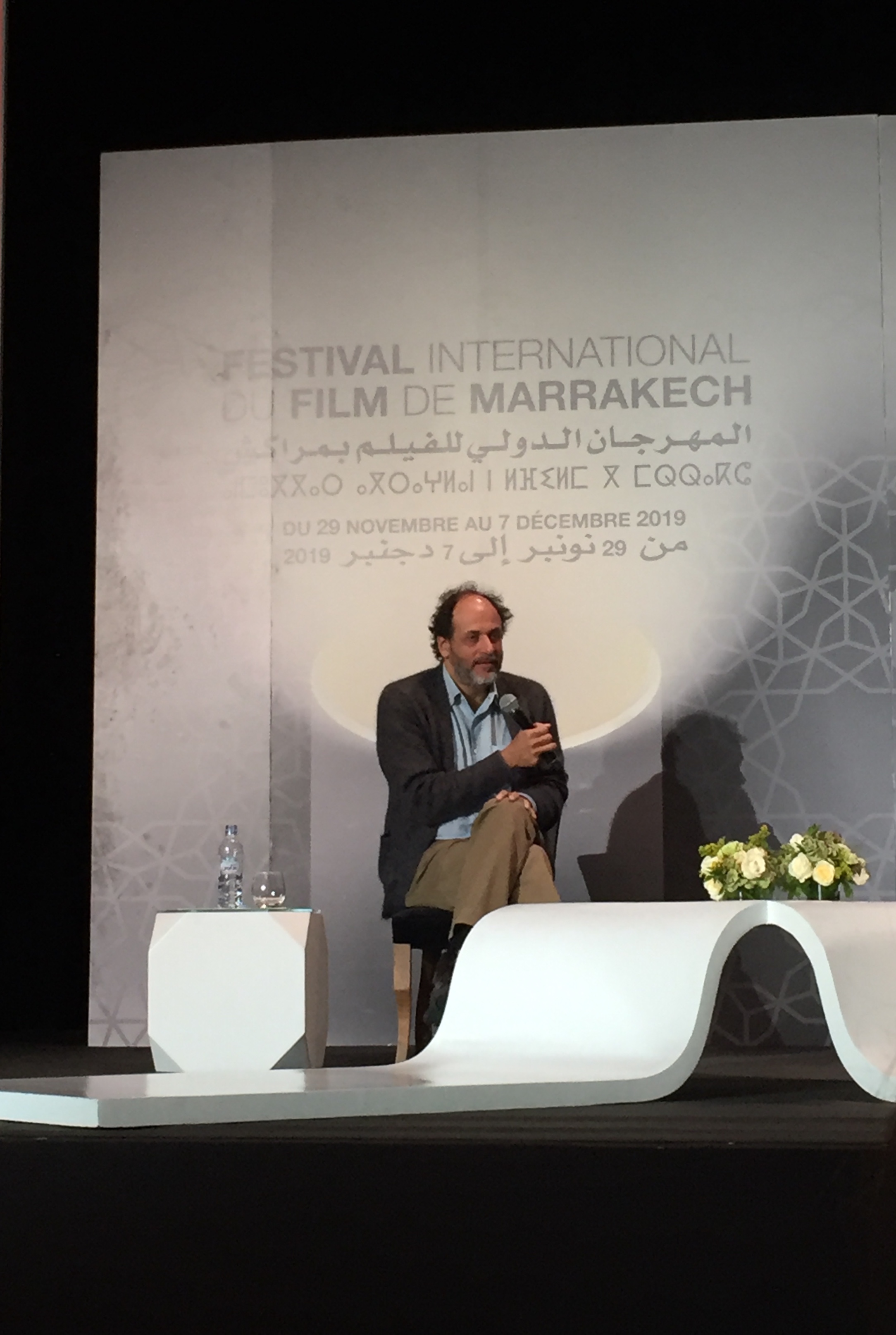 ‘Do it or Die’ is Guadagnino’s motto. He never has a plan B. Even with some heavyweight hits behind him Guadagnino still feels he has a ‘bombastic gorilla’ approach to things rather than a calm confidence.

Born in Palermo of an Algerian mother, Luca Guadagnino (1971*) spent his early life in Ethiopia where his first experience of the cinema was watching David Lean’s epic Lawrence of Arabia. He knew immediately that he wanted to be a film director, but had no formal idea of how this was going to happen. He approached cinema is a very haphazard way without any formal idea of what he wanted to see and had no academic reflection of cinema. A particular favourite was Nagisa Oshima’s Max Mon Amour (1986) but gradually by watching everything he could lay his hands on came a realisation of how he should approach his own career as a director. So cinema started as a way to understand himself and for many years he was still trying to find himself through film. As a director he is convinced that cinema is about form. And the form is the perspective of the filmmaker. Cinema is the act of the auteur; the person who brings their own version of the story to the film. So a boring storyline about a woman who works as a prostitute becomes a profound reflection of her way of being and her importance in the world. There is a massive difference between the story and the way you tell it.

The Protagonists (1999) was his first feature and he spent a great deal of time trying to meet and persuade the main character Tilda Swinton to be part of it all. It sees an Italian movie crew fetching up in London to make a documentary about a murder case that took place a few years before. Guadagnino expresses his profound feelings about Tilda: “You love Tilda because you can’t not love her when you meet her as a person. Her joy and her work as an artist is inspiring”. Derek Jarman’s Orlando (1992) was the film that first brought Tilda to his attention.

Derek Jarman would prove to be a strong influence in his early days as a director. He met Jarman in London and found in him a level of provocativeness and yet deep wells of humanity that really appealed to his idea of cinema at the time. Jarman’s way of putting material on the screen was as exciting and seductive as anything he’d seen in Hollywood at the time. He’d seen Tilda as a regular character in Jarman’s movies such as Caravaggio and so by the time he eventually met the actress he was already in love with the idea of casting her in his owns films. When Tilda arrived in Italy to present a series on underground filmmakers, Guadagnino had already developed a profound connection with her work as an actress. She was opposed to the mainstream cinema of the UK at that time, and it was all very polemic. Six months after the death of Jarman the two met and they are still working together to this day.

Tilda Swinton: The Love Factory saw the two working together again. Alberto Barbera supported this short documentary at the Venice Film Festival in 2002, but the film was slated by the critics, who walked out in flocks. Rather than being upset Guadagnino used this as a useful way to reflect back on his film and its possible flaws. And this experience would go on to serve as an antidote against an inflated ego.

Guadagnino returns regularly to making shorts and doesn’t want to be bound to a specific medium or feature length idea. If he has a creative impulse, then he puts it on film. In I Am Love (2009) his next significant feature, Tilda Swinton stars as Emma who has left her home in Russia to live with her husband, a powerful industrialist in Italy. She becomes the respected mother of three, but feels unfulfilled in this closeted environment and is suddenly drawn to Antonio, a talented chef who she meets through her son, with devastating consequences.

Music plays a crucial part in Guadagnino’s cinema. When he was filming Melissa P,  a drama exploring a young woman’s sexual awakening, he had the chance to work with the legendary producer Gareth Williams who introduced him to the American minimalist composer John Adams. Adams took his inspiration from Hitchcock and Bernard Herrmann. Adams’ triumphant music went on to shape Melissa P. And in the same way, Adams’ symphonic music compliments the final cataclysmic scenes of I Am Love. In his latest film Suspiria (2018) music and dance also play a vital part. A darkness swirls at the centre of a world-renowned dance company and one that will engulf the artistic director, an ambitious young dancer played by Dakota Johnson.

In Call Me By Your Name (2017) Guadagnino works with James Ivory on a script which starts off by being faithful to Andre Aciman’s book, although then there are significant changes. He transposes the action to the seaside instead of the countryside, and sets the story in 1983 instead of 1987. But the narrative is extremely fateful and once again dance plays a part, in a much more subtle and metaphorical way. The so-called ‘forbidden’ dance at its core gives Elio (Armie Hammer) a chance to say what he needs to say to Oliver Timothee Chalamet). Something inevitable happens in their relationship, and this has to come out into the open. So actually the ‘dance’ round the statue becomes about revealing rather than hiding their personal story. And this is brought out into the open in their striking facial expressions and body language. Guadagnino has to see his actors actually on set before he decides how he shoots the scene. He wanted Timothee to be a sexually fluid young guy who is able to break away from being too academic. In other words, he didn’t want Freddy from Room with a View.